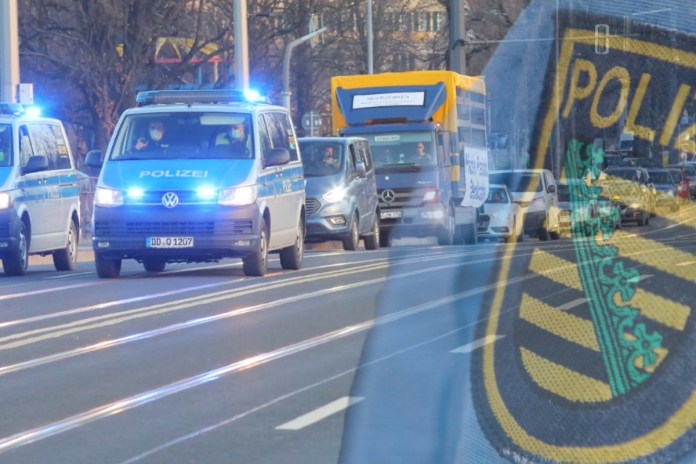 When up to 500 cars drove through Dresden on Saturday, there were several crimes on the sidelines of the corona demonstration.

Dresden – Conflicts during the car parade! As on Saturday up to 500 cars through the State capital drove, it came according to the Dresdner police equal to several crimes on the verge of Corona-Demonstration.

Between 2 p.m. and 7 p.m. there was a lot of noise on the streets of Dresden. It was honked, there was a demonstration. Hundreds of people sat behind their steering wheels and took a stand against the corona policy.

But the protest was not that peaceful in the end.

As the Dresden police summed up on Sunday, there were some “criminal offenses in connection with the gathering”.

First there was a dispute around 4.15 p.m. on Reichenbachstrasse.

Participants in the assembly clashed with two cyclists who tried to block the elevator.

About three quarters of an hour later, a similar incident occurred.

In the meantime, having arrived on Augsburger Straße, four cyclists opposed the parade and wanted to stop it.

The  same picture on Bautzner Strasse.

The  police had their hands full breaking the blockades.

Sadly, stones were occasionally thrown, which led to a car being damaged. Not the only one. “At the end of the elevator in the area of ​​the Marienbrücke there was also another stone throw at the meeting. No suspects or injured persons are known,” the police continued.

The re were also fights. A meeting participant is said to have used physical violence against an opponent of the demo.

The  police are investigating all known cases and following up on the operation,” the officials say. In addition, an officer was hit by an uninvolved third party during the meeting and injured, albeit slightly.

The  Dresden Police Department asks the population for assistance in the course of the investigation into the various offenses.

Anyone who can provide information and information about the incidents, or who have even been harmed, should contact the officials.

The new U5 has opened: Berlin has closed a large gap...

Kottbusser Tor: dodger pulls the inspector into the subway and hits...