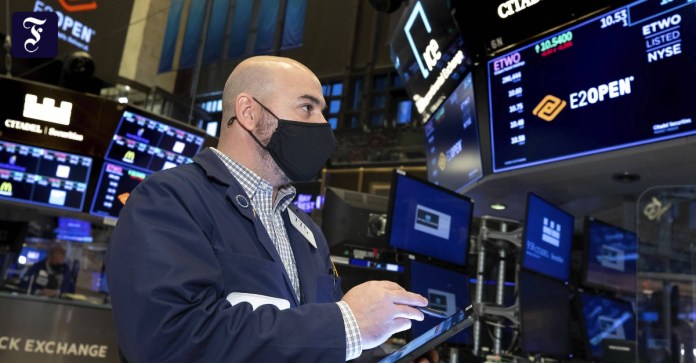 Dhe hope of a rapid economic recovery in the United States through a massive aid package and progress with corona vaccinations are driving the New York stock exchanges to new record highs at the beginning of the week.  The  prospect that the US $ 1.9 trillion economic stimulus program could get underway in the coming weeks, said stockbrokers, created a buying mood. But statements by the American Treasury Secretary Janet Yellen that the country would achieve full employment again next year if Congress approves the Corona aid fueled confidence.

“Most investors are willing to take a higher than normal risk,” said Matt Hanna, portfolio manager at Summit Global Investments. “Multiple events come together, almost unlimited expectations for an economic upswing combined with companies that are actually doing pretty well, and that fuels very speculative behavior.”

Oil in an upward wind, too

The  technology-heavy Nasdaq advanced one percent to 13,987 points.

The  broad S&P 500 gained 0.7 percent to 3915 points. All three indices were fresh records. Previously, the Dax had also risen by 0.8 percent to a record high of 14,169.49 points. In the course of trading, however, he gave up the profits again and went out of trading with 14,060 meters hardly changed.

Oil prices also climbed to their highest level in more than a year. This made investors resort to energy stocks.

The  shares of Marathon Oil, Schlumberger, Exxon Mobil, Chevron and Occidental Petroleum rose between 2.5 and 13.1 percent. Last week, the S&P 500 and the Nasdaq posted their highest weekly growth since the presidential elections due to positive earnings and economic data.

The  oldest and most important cyber currency gained around 17 percent to $ 44,253. Tesla’s announcement that he had invested $ 1.5 billion in Bitcoin created a buying mood.

The  shares of the electric car maker rose 1.3 percent.

The  cryptocurrency companies Riot Blockchain and the Marathon Patent Group each gained more than 40 percent.

In the course of the Bitcoin rally, PayPal’s shares also advanced by 4.7 percent. Last year, the online payment provider announced to its customers that they would buy with Bitcoin and other digital currencies via the payment platform.

The  PayPal rate had more than doubled last year.

As good as Cristiano Ronaldo or Lionel Messi? Robert Lewandowski...

Pandemic – Corona death toll in Europe: Italy ahead of Great... Hundreds of school children in Nigeria disappeared after attack