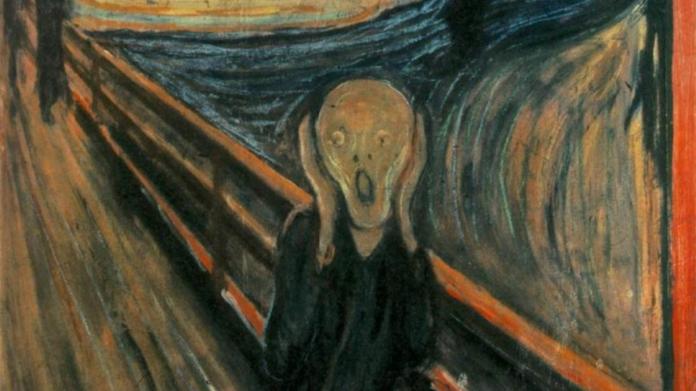 “ The  Scream” contains a secret message

Hard to see with the naked eye, there is a sentence on one of the most famous paintings in the world. For a long time it was unclear how he got there.

The  National Museum in Oslo has now identified the cause with infrared scans.

The  Scream” by the Norwegian painter Edvard Munch, which was created in 1893. It shows a human figure with an apocalyptic red sky in the background, who presses her hands against her head while her mouth and eyes open in fear.

The  masterpiece of symbolism not only inspired an emoji, but was also a mysterious enigma for a long time.

Because in the upper left corner of the first picture of the four-part row is written in Norwegian in a very small and barely recognizable pencil: “Could only have been painted by a madman.” Art historians all over the world were unsure from whom the mysterious message was sent came from “

Has it always been there and written by the artist himself? Or had a museum visitor or employee smeared the work of art?

While the picture was being prepared for the opening of the National Museum in Oslo in 2022, the museum wanted to solve the mystery of the enigmatic pencil message once and for all – and carried out infrared scans on the painting.

The  sentence came from Munch himself. In a press release from the National Museum, she said:

The  script is without a doubt Munch’s own.

The  manuscript itself, as well as the events of 1895, when Munch first showed the painting in Norway, all point in the same direction.

To achieve this, the researchers made the handwriting on the painting so visible with the help of infrared scans that it could be recognized without any problems. It was then compared with the artist’s diary entries and letters.

But why did Munch write on his own work of art?

Although the first and probably best-known painting from Munch’s “

The  Scream” series was completed in 1893, art historians assume that the artist added the sentence two years later.

The  trigger for this was probably the first reactions of the public and the critics to the now famous picture when Munch exhibited it for the first time in his hometown Kristiania, today’s Oslo.

The  public speculated about the state of mind of the painter: At a discussion night in a student association, at which Munch was presumably present himself, the young medical student Johan Scharffenberg claimed that Munch’s pictures would prove that he was crazy. Munch was deeply hurt by the allegations. In various letters and diary entries he kept talking about this incident. Hence, art historians suspect that Munch’s inscription was written in response to or shortly thereafter.

Both his father and sister suffered from depression. After a nervous breakdown, Edvard Munch was also hospitalized in 1908. In his life he repeatedly suffered from anxiety disorders and had to struggle with psychological problems, which he worked through in his art.

Men’s singles in Antholz on TV and livestream

Crime – Frankfurt am Main – plainclothes policeman gets into revierstreit...

“We demand FFP2 masks as the standard for all employees” A US boy becomes a bormionator – alpine skiing