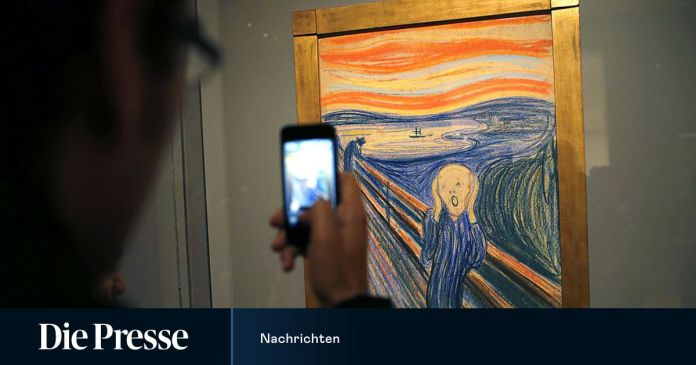 “Kan kun være malet af en gal Mand!” Is written in Norwegian in the upper left corner of the picture. Translated: “Can only have been painted by a madman!”

The re are many puzzles around “

The  Norwegian National Museum in Oslo was there It is now known that a barely visible sentence on the picture was written by the artist himself For years there had been speculation about the origin of the small lettering on the oil painting.

“Kan kun være malet af en gal Mand!” Is written in Norwegian in the upper left corner of the “Schrei” original – which means: “Can only have been painted by a madman!”

The  sentence, barely noticeable to the naked eye, was written on the color of the painting with a pencil after Munch had finished the work.

Munch feared for his mental health, as the background of the picture tells us: A bridge, which is actually a path, gives a precarious location. It is the view from a hill in front of Oslo, where not only the slaughterhouse was, but also the psychiatric hospital for women. Munch’s younger sister was interned here.

The  older sister had died of consumption.

The  mother of tuberculosis when Munch was five. Munch himself is said to have had a manic-depressive disorder. In any case, death and suffering shaped the family – and Munch’s work.

Manuscript and events of the time of origin

The  origin of the sentence was puzzled for a long time. In preparation for the installation of the work in the new National Museum, which is due to open in Oslo in 2022, the original from 1893 was thoroughly examined. Both the manuscript itself and events from the time it was created left no doubt that the inscription came from Munch, the National Museum said on Monday.

Next Zoff at the Corona summit? – Schwesig wants to...

In lockdown, boys forget what day it is

Get on the roof – FAZ – Frankfurter Allgemeine Zeitung