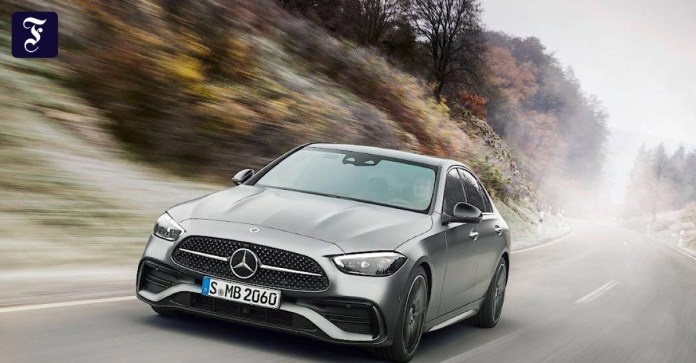 EWhen Mercedes-Benz renews the C-Class, there is an alarm mood. With the competition, which must not lose touch with a currently somewhat bland Audi A4 and an eternal rival BMW 3 Series. And in-house, because the new model has to be even better than the previous one.  The  first glance falls on the design, where Gorden Wagener’s troops are chasing after a self-inflicted dilemma.

The  clean, clear lines have brought the once sleepy cars from Stuttgart far forward, even among the youth. But how do you develop it further? It is now difficult to distinguish an S-Class from an E-Class, and now also from a C-Class.

The  side guide is skillfully under tension, at the rear the two-part lights intervene to support the width.

The  C-Class, which has grown from 4.68 to 4.75 meters in length, looks successful, but we could only imagine a more consistent conclusion. Depending on the willingness to spend, large or very large screens move into the interior, the steering wheel is based on sports cars, ambient light illuminates the dashboard right into the air vents. And also in the roof. Mercedes combines a noble facility with a user experience that is heavily geared towards digital, how well it works in everyday life, we will describe after an extensive test drive. First the car was shown statically.

Months ago we sat in a prototype and were impressed by the atmosphere. 455 liters fit into the trunk of the sedan, the station wagon loads 490 to 1510 liters.

The  low use of chrome is striking. Across the industry, sustainability is being written more and more, as is the case here, attention is paid to the extraction and recovery of materials.

The  new C-Class, with its wheelbase that has grown by 2.5 centimeters, is officially approved for five people. In fact, four of them feel comfortable on well-contoured seats, and the fifth is tight.

From a technical point of view, Mercedes-Benz uses everything that meets the highest demands, of course always a touch below the S-Class that delivers the steep draft.

The  C-Class also has rear-axle steering that improves handling and steers by 2.5 degrees here, not 10 degrees as in the S-Class. Adjustable dampers are also on board.

The re is an additional airbag between the driver and front passenger to minimize the risk of injuries in the event of a side impact. LED headlights are standard, and even the light can be digital for an additional charge.

The  armada of assistants to list would be endless, there are plenty and for our taste too many for some.

Driving yourself should be in the foreground in such a crisp car. Four-cylinder engines are available for this, and exclusively four-cylinder. If you want six cylinders, you have to hope for the fast subsidiary AMG. Something is offered for every need, with a slight staggering in time, diesel, gasoline, diesel hybrid and gasoline hybrid.

The  automatic with 9 levels is always there.

In principle, all drives are electrified in one way or another for the purpose of greater economy.

The  diesels basically have a displacement of 2 liters and their power spectrum ranges from 163 to 265 hp.

The  maximum speeds are 226 to 250 km / h. Soon after the launch, the fourth generation of plug-in hybrids will follow.

The y use the same basic engines, while electrification is making progress.

The  data sheet shows a system output of 313 hp and a torque of 550 Nm, as well as a battery with a gross capacity of 25.4 kWh, which should ensure an electrical standard range of around 100 kilometers in accordance with the WLTP cycle. That won’t quite work in reality, but it will still be enough to turn the C-Class into an electric car in many everyday cases.

The  sedan and station wagon will appear in stores simultaneously in June 2021. Mercedes-Benz does not want to comment on prices or how much they will rise until the end of March.

New high since August 2020: Permira continues to retreat at TeamViewer...

Renewers with the spark of the gods and without hearing

Attack on Capitol from the perspective of the right