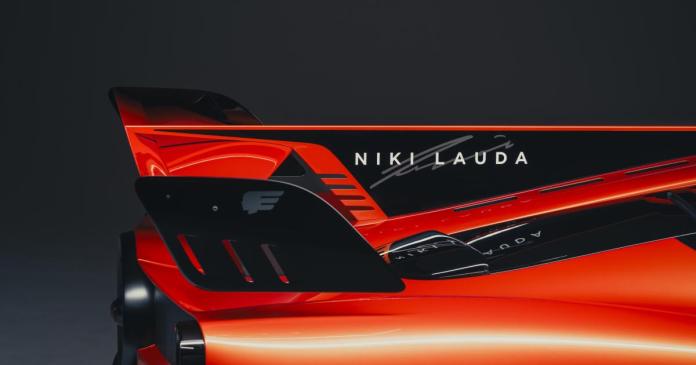 Gordon Murray Automotive is now presenting the T50.S Niki Lauda, ​​which is even more extreme than the T.50 and is intended for use on the racetrack. Compared to the road version, hundreds of parts have been changed and the car has been fully trimmed for lightweight construction.  The  T.50S Niki Lauda weighs 852 kilograms and they are moved by a V12 cylinder that produces 725 hp and rotates up to 12,100 rpm.

The  distinctive feature of the Murray car is the turbine at the rear, which has a diameter of 400 mm and, together with the other aerodynamic aids, provides an output of up to 1500 kg. Unlike the T.50, however, the T.50S Niki Lauda has a rear wing, a larger diffuser and a fin – with the Niki Lauda logo – on the rear.

The  driver sits in the center of the car, with a seat for a copilot installed to the left of the driver. If the owner does not want this, the passenger seat remains outside. At the same time, the T.50S Niki Lauda should offer the same good all-round visibility and as much space as the street version.

Customers who buy the car can design it according to their preferences anyway.

The y also get technical support for Track Days around the world.

25 units of the T.50S Niki Lauda will be built, each chassis is named after a racing win of a Gordon Murray car (starting with Kyalami 1974).

The  production of the cars will begin in January 2023 after the 100 planned T.50s have been built.

The  price for a car is 3.1 million pounds (excluding taxes) – about 3.6 million euros.

The  T.50S was named in Niki’s honor and is intended to commemorate his legendary victory with the Brabham BT46B at the Swedish Grand Prix. Niki was not only a great racing driver but also a good friend and it is fitting that this will be the T. 50S Niki Lauda unveiled on his birthday. Niki would certainly have liked the innovations and the technical details in the car, “says Gordon Murray. Niki Lauda’s family commented, “We are very proud that Gordon Murray Automotive has named the car after Niki. He would have been honored to have one of Gordon’s cars, with whom he was on good terms, bear his name . ”

“Verbotene Liebe” star Thomas Gumpert: He dies at the age of...

Aldi and Lidl: Discounters are pushing into the city centers

Queer traffic light men in Berlin – which one would you...