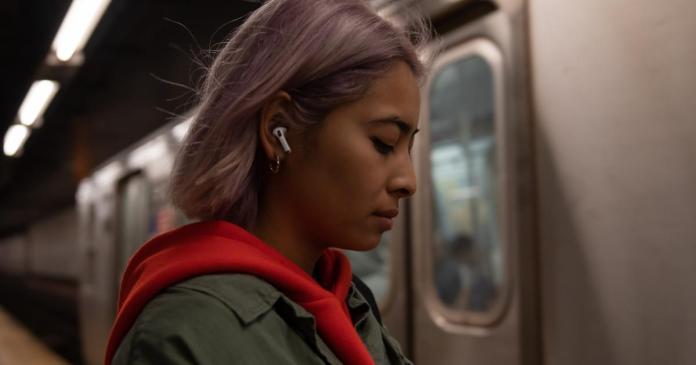 The y are turned away in the photo, so they cannot be seen.

The  charging cradle is also noticeable. It’s wider than Generation 2, but narrower than the AirPods Pro.

The  shape coincides with previously leaked computer-generated images of the AirPods Generation 3, which is why many users assume that the photo is real. However, 52audio has also published fake images in the past, which is why the information on the website should be viewed with caution.

According to rumors, the Gen 3 AirPods are not just optically borrowed from the AirPods Pro. For example, they should also have a system that helps with pressure equalization. This should keep the headphones comfortable to wear for longer periods. Spatial Audio is also said to be on board. This feature for 3D sound is currently only available on the AirPods Pro and Max.

In addition, the Gen 3 AirPods should have a touch surface for gesture control, for example to switch louder or quieter with swiping gestures.

The  Gen 2 can only be controlled by a single and double tap.

The  AirPods Generation 3 should be officially presented as early as mid-March, if it goes after some leaks.

The  well-known analyst Ming-Chi Kuo recently said that production will not start until the first half of 2021. Sales would then probably only start in autumn.

Four days after landslide – Seven dead found in Norway after...

Turkey: Corona “tsunami” breaks across the country – doctors sound the...

Strength trains after a forced break due to back problems

Vaccination centers in the capital presented: This is how Berlin wants...

Galaxy SmartTag: Gadget is to be presented together with Samsung Galaxy...