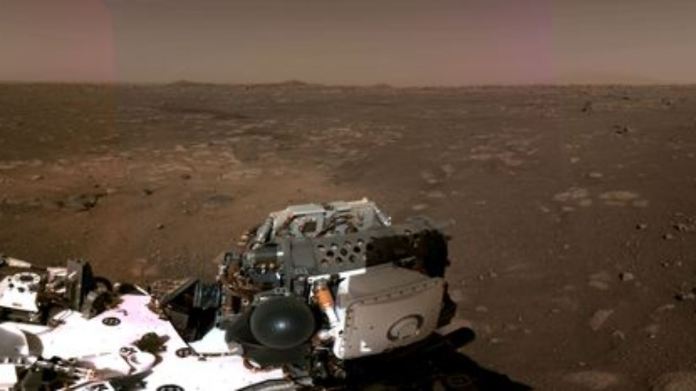 With a risky maneuver, the NASA rover “Perseverance” touches down on the surface of Mars. Now the space agency is showing the technically sophisticated landing from several perspectives.  The  red planet can not only be seen, but also heard.

The  US rover “Perseverance” has sent the first videos of its landing and audio recordings from Mars to Earth. Such video and sound recordings have never been made before, said the US space agency Nasa at a press conference. “

The  microphones on board the rover did not send any useful data from the landing – but later sent the first ever recorded sound recordings from the surface of Mars, it said. Among other things, something can be heard on them that sounds like a gust of wind.

The  small “Ingenuity” helicopter on board the rover had previously sent its first status report to the control center in Pasadena, California – and according to NASA experts, it “seems to be working perfectly”. “Ingenuity” (in German: ingenuity) is still attached to the underside of “Perseverance”. But in 30 to 60 days the helicopter is supposed to explore Mars from a bird’s eye view. It would be the first flight of an aircraft over another planet.

Frankfurt am Main: Lane closed on A 648 between junction Theodor-Heuss-Allee...

German trade does not expect opening on January 10th

Linke demands immediate opening of the Spreepark for temporary use