Glasgow (AP) – From postman to international chart topper:  The  Scottish singer Nathan Evans (26) has been number one in the German charts with his sea shanty “Wellerman” since Friday.

He can’t really grasp it yet: “It’s just crazy. I see how well the song is received in so many countries around the world. It’s overwhelming, ”said Evans of the German press agency.

The  26-year-old worked as a postman until recently and has been posting cover songs on the Tiktok platform for over a year. Shortly after Christmas he published the New Zealand sea shanty there, which was called up millions of times within a short time and also recorded by celebrities such as Andrew Lloyd Webber, Gary Barlow and Brian May.

“It’s all so new to me,” said Evans of his steep ascent. “All of a sudden I needed a manager, got a record deal and had to find a lawyer. I had absolutely no idea. But so far everything has gone well. ”

In December, the musician is going on tour in Great Britain, and a first album is also being planned. He wants to put the income from his first song in a house. “I would like to stay in my hometown or at least close by. Glasgow is 20 minutes away so maybe I’ll move there. But a house is definitely the next goal. ” 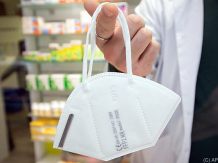