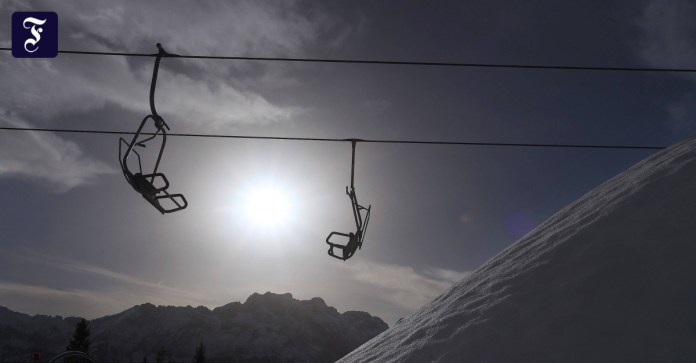 Dhe hope was quickly buried. Less than 24 hours after the federal and state governments extended the lockdown into March, the operators of Germany’s largest ski area declared the season to be over. It hadn’t even started on the slopes. Hausberg, Kandahar and Zugspitze in Garmisch-Partenkirchen remain orphaned.

The  organizational and financial effort is immense to get the ski area ready to go,” says Matthias Stauch, board member of the Bavarian Zugspitzbahn, which operates the ski areas grouped under the brand “Garmisch Classic”.

Planning security is lacking in order to guarantee an economically viable operation in the remaining time.

The  last hope rests on Germany’s highest mountain. Slopes on the Zugspitze can usually be skied until May – if skiers are allowed to come.

If Saxony’s Prime Minister Michael Kretschmer (CDU) has his way, it remains empty at Easter. “I am in favor of speaking truths: Unfortunately, there can be no Easter holiday in Germany this year,” he lectured on “Bild am Sonntag”.

The  hotel association Dehoga speaks of a “resounding slap”.

The  mood in the companies lies between desperate and aggressive.

The  hospitality industry quickly developed hygiene concepts, but the federal and state governments were unable to agree on a step-by-step plan for openings for weeks. “But you have managed to wear down the people and businesses in the country,” he said.

The  federal government is trying to limit the damage.

The re is “a lot to suggest that we are now waiting for the development in the next few weeks and then assessing which easing is possible at what point in time,” it said. This is what companies had expected from the most recent Bund-Länder meeting.

For the time being, a target seven-day incidence of 35 infections is linked to easing in retail, nothing was said about tourism.

The  German Vacation Home Association is already concerned that politicians could only make vacation possible if the incidence is below 20.

The  cohesion in the industry is eroding, everyone is increasingly fighting for themselves in the crisis. Vacation home association chief Göran Holst believes it is unconstitutional to equate hotels and vacation homes in lockdown.

The  argument goes like this: guests in apartments stay among themselves, in the hotel they meet others at the reception, in the elevator, in the restaurant.

“We demand a factual assessment based on objective criteria, as is already done in other areas,” says Holst. Trade is subdivided, which is also possible in tourism.

The  vacation rental landlords often have no right to help, and some house builders also finance their own home with a separate apartment for guests.

Sale in the hotel industry?

Dirk Iserlohe, head of the Dorint Hotels, paints a gloomy picture of the situation in the hotel industry. To compensate for closings in November and December, he got a discount – 60,000 euros for the entire chain. Neither that nor the increase in possible total aid to 12 million euros appease him. “How is a medium-sized company supposed to survive that exceeds the current maximum limit of 12 million euros under the Bridging Aid III funding program for uncovered fixed costs in November alone?” He asks.

Iserlohe warns of a sell-out in the German hotel industry. Foreign hedge funds and capital providers are in the starting blocks to take advantage of opportunities.

The re is no room for traditional companies. His fear:

The re will be enough beds after Corona, they will just belong to others.

Empty in Bavaria, operation in Poland

As at the Zugspitze, winter tourism is threatened with a lost season in many places. According to market researcher TDA, bookings in travel agencies and on the Internet were 86 percent below the previous year’s level. Zugspitzbahn manager Stauch, who is also a board member of the Association of German Cable Cars, estimates that his industry, with 80 to 90 million euros in sales, lacks the entire income from a normal season: “Many lift and cable car companies will consider whether they will open after the lockdown has ended still worth it. “

“People were only locked away during the plague”

Buying a PS5: No fourth wave of sales? Saturn and...

Outlook for Year 5 and Crossover with Shovel Knight

Covid disease is significantly more dangerous than a dose of AstraZeneca