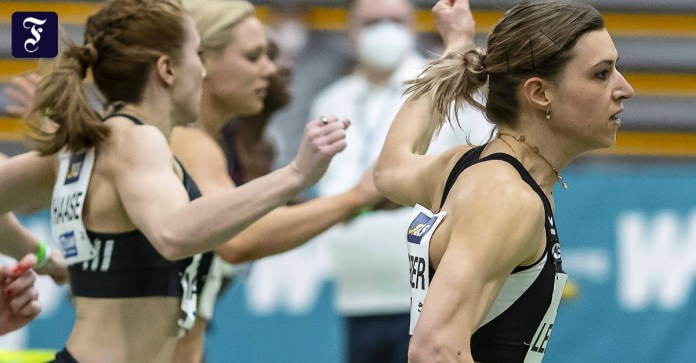 She started the competition last, jumped 4.41 meters and was German champion for the tenth time and with a single attempt. But Lisa Ryzih could not be satisfied with the performance at the German championship in the hall, which was held at the weekend in Dortmund without an audience. “Internationally, that’s the entry level,” she said.

The refore, she waited up to the height at which the last three competitors were eliminated. She then raised the bar eight inches – and tore it three times. “It’s not a half or a whole,” she said. “In the world I can’t jump at the front right now. And in Germany the competitive situation is not enough for me. ”Her failure at 4.61 meters made that clear: This is the qualification level for the European Indoor Championships, which will take place in Torun, Poland in a fortnight. For Lisa Ryzih this winter is 4.42 meters as the best performance.

The  lack of challenge is a challenge of its own for quite a few track and field athletes at the end of a long year in which many competitions were canceled due to the pandemic, which is characterized by the postponement of the Olympic Games to the summer of this year and in which the usual training trips up to now cannot take place. Those who do not use the time to take a break will lack competition.

Unless you’re Malaika Mihambo. She won the long jump with 6.70 meters, although she took off well in front of the board in the victory jump. She had to stop exercising for a week because she hit her head so hard that she suffered a mild concussion. “In this respect, I’m glad that I’m here at all,” she said in Dortmund.

Best jump of the day

Max Hess, the lone leader in the triple jump, had more to do with himself than with his challengers. With the only valid of his first five attempts, he swung to 16.53 meters and thus to victory. Only then did he get serious. “

The  title is yours,” he said to himself, and “just hit it on the board and jumped off. 17 meters came out. ”

That is half a meter this side of his best performance and 1.07 meters shorter than the top performance this winter, the indoor world record of Hugues Fabrice Zango from Burkina Faso. But the best jump of the day makes Hess number two in Europe and thus a medal candidate for Torun.

The  opposite of the loneliness caused by Corona experienced the pole vaulters and sprinters this winter. Torben Blech won the first title in front of his training partner Bo Kanda Lita-Baere by flying over 5.72 meters. Instead of going to the training camp in South Africa, the two of them drove from Leverkusen to Zweibrücken in the Palatinate to train with old master Raphael Holzdeppe. “It is an advantage for us that we can measure ourselves at this level every day,” said Blech.

The  finals of a new generation”

Head coach Anett Stein was particularly happy about the sprints. “Those were the finals of a new generation,” she said. “We have exemplary dynamics in this discipline.” Kevin Kranz, champion and with 6.52 seconds over 60 meters now in the German record list tied with Julian Reus, made it clear that he is driving to the European Indoor Championships with the highest ambitions.

The  22-year-old, having returned from a year and a half failure due to an infection with Pfeiffer’s glandular fever, has suddenly become number two in the world, on par with the American Michael Rodgers behind his compatriot Trayvon Bromell (6.48). Challenges are what drives him. “We have a really good training group,” he says of the Wetzlar sprint team, which actually trains in Frankfurt. “

The  others are there to be competition. That’s perfect. You climb up. ”Six sprinters ran the best time in the final.

The  prospects for Amelie-Sophie Lederer from Munich are similar. She increased in the final over 60 meters to 7.12 seconds; European champion Dina Asher-Smith from Great Britain (7.08) and Pole Ewa Swoboda (7.10) were the only ones faster in Europe this winter. She wasn’t even qualified for Torun by the weekend. Instead of training in Florida, the sprint squad trained in the Kienbaum training camp near Berlin this winter – “a different setup thanks to Corona,” says the national coach. “It didn’t do them badly that it didn’t go as usual.”

5000 year old fragment from the Great Pyramid of Cheops discovered

Sibanye Stillwater: Trading in Securities by a Director

Monolith spotted in the Taunus: The enigmatic steles continue to spread...