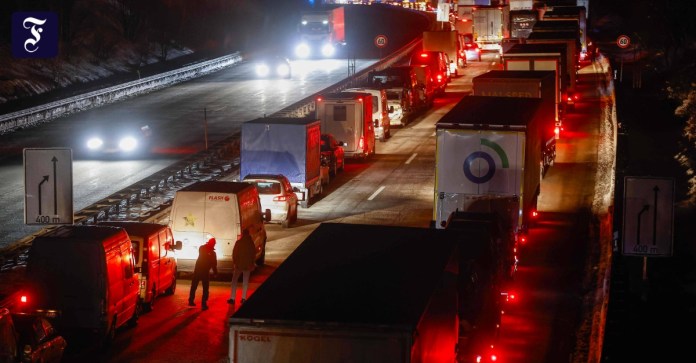 NAccording to various German car manufacturers, the effects of the corona border controls have so far been manageable. “ The re are still no restrictions at our locations, but we are of course continuing to monitor this,” said a VW group spokesman on Monday. “Our plants are currently supplied and are producing according to plan,” said BMW on Monday. “

The  first deliveries have already crossed the borders and arrived at our plants without any major delays.” An Audi spokesman explained: “We are currently producing without restrictions, are monitoring the situation and further developments.”

Kilometers of traffic jams have formed in front of the motorway border crossings to Germany.

The  federal government had declared the neighboring country a “virus variant area” and reintroduced stationary border controls. On Monday morning, the trucks backed up to Usti nad Labem (Aussig on the Elbe) on the E55 / D8 motorway between Prague and Dresden.

The  police regulated entry into the tunnels. On the E50 / D5 in the direction of Nuremberg, a column of trucks more than 20 kilometers long temporarily formed.

Are the supply chains tearing?

That emerged from the information provided by the motorway administration and traffic information.

The  Czech Republic with its suppliers is also an “extended workbench” for many German companies. Since Sunday, only Germans and foreigners with a residence and residence permit in Germany have been allowed to enter from the neighboring country.

The re are exceptions for health workers, truck drivers and other transport personnel in freight transport.

“As of today, all of our German locations are running, including those in Saxony,” said the Volkswagen headquarters in Wolfsburg.

The y tried to prepare for the situation in the best possible way. However, the topic is multi-layered: “Even if a truck driver brings a negative PCR test to the border, that doesn’t mean that he can’t stand in line because of long traffic jams.” That is why one is with suppliers and logisticians in close contact. “We now have to keep looking from day to day.” Something similar was heard from the light VW commercial vehicles in Hanover.

The  Association of the Automotive Industry (VDA) and the Federal Association of Goods Transport, Logistics and Disposal (BGL) had warned against the disruption of supply chains in view of the planned controls at the borders with the Czech Republic and Tyrol.

The  VDA and BGL suggested on Friday that self-rapid tests by truck drivers should be accepted even without a doctor’s certificate until sufficient test capacities were available at the borders. This is the only way to prevent the supply chains from being torn down, with subsequent production stops in the automobile factories and supply bottlenecks in retail.

VDA President Hildegard Müller explained that many parts for automobile production in Germany are delivered “directly to the assembly line” from Austria and the Czech Republic. “If there are long traffic jams due to the testing and registration obligations at the borders, the supply chain is likely to be broken and shortly afterwards a production standstill in many car plants in Germany,” warned Müller.

The  first production lines would come to a standstill after a few hours if there was no material supply.

In the spring of 2020, companies would have had a “warning period” of two to three weeks before deliveries from Italy failed to materialize and could increase their parts stocks in advance, explained Müller. Now the decision comes as a surprise and presents manufacturers, suppliers and the logistics industry with “enormous challenges”.

The  Czech Republic is at least as important for car production in Germany as Northern Italy.

BGL board spokesman Dirk Engelhardt stated that his association was calling for “a practicable test strategy for freight transport as soon as possible”. Anyone who without exception demands negative corona tests before entry for goods traffic must also say where the drivers can do these tests.

In addition to the test centers, which would have to be set up immediately at the borders, rapid tests by truck drivers without a doctor’s certificate should be accepted, demanded Engelhardt. “Otherwise, not only will many supermarket shelves remain empty because we are missing the truck drivers, but the assembly lines, especially in the automotive industry, will come to a standstill because they can no longer be supplied.”

For the Czech Republic, Slovakia and the Austrian state of Tyrol, tough restrictions have been in place on entry to Germany since Sunday due to the spread of coronavirus mutants.

The  federal government classifies these areas as “virus variant areas”, for which there is a fundamental transport ban for airlines, rail, bus and shipping companies. Entrants must have themselves tested for the corona virus in advance and be quarantined after arrival.

The  government extended the state of emergency for two more weeks on Sunday.

Fire is already wiping out half of Fraser Island

SKN women win in the CL against Zurich

Coronavirus: The Kufstein district is testing