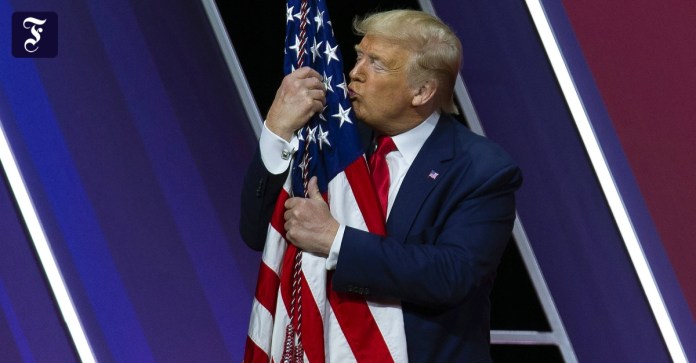 Lara Trump fueled speculation over the weekend that her father-in-law might run for Republican presidential nomination for the 2024 election. “He told us to hold on; that this is not over for him. And he has indicated that he would probably be interested in running again in 2024, “Lara Trump, wife of Eric Trump, told Fox News on Saturday. Trump was the leader of the Republican Party and the one everyone would turn to for support for the 2022 congressional elections or beyond.

In an interview with the right-wing broadcaster Newsmax, Trump had already pondered his future role in politics last week. “I can’t tell yet, but we have tremendous approval,” he said.  The  poll numbers went through the roof. Normally the values ​​would fall after an impeachment, “but the numbers are very good”.

Trump plans to give his first speech since the end of his term in Florida next weekend. He would appear on February 28 at the Conservative Political Action Conference (CPAC) in Orlando, people around him said on Saturday. Trump will talk about “the future of the Republican Party and the conservative movement” as well as the “catastrophic” amnesty and border policies of his successor Joe Biden.

Former Vice President Mike Pence will not attend the conference, Fox News reported on Sunday, citing people who are familiar with the planning of the event. Pence was asked to speak, but canceled.

Trump clearly lost the November 3 presidential election to Democrat Biden. Since then, a dispute between Trump supporters and traditional Republicans has raged in the Republican Party. According to a poll by Quinnipiac University last week, three-quarters of Republicans want Trump to continue to play a prominent role in their party.

A possible foretaste of his speech in Orlando next weekend could be a statement by Trump on Tuesday, in which he covered the influential Senate leader Mitch McConnell with violent verbal attacks and suggested that the party be ousted.

Trump launched a series of personal attacks against the Republican minority leader in the Senate. McConnell is “one of the most unpopular politicians in the United States”, a “gloomy, disgruntled” politician “who does not smile”.

“If the Republican senators stand by him, they’ll never win again,” Trump continued.

The  former Senate majority leader also lets himself be brought before the Democrats and weakens the Republicans.

McConnell – Senate majority leader until January – has long been an important ally of Trump in Congress. After storming the Capitol on January 6, the powerful puller clearly distanced himself from Trump and made him jointly responsible for the violence.

In the impeachment process against Trump in the Senate, McConnell voted with a majority of Republicans for an acquittal for the former president. But then he said that Trump was undoubtedly “practically and morally responsible” for storming the Capitol. Trump’s behavior on January 6th was a “shameful violation of his duties”. McConnell also referred to the possibility of criminal and civil proceedings against Trump.

Trump had braced himself against his election for weeks with baseless accusations of fraud, plunging the United States into a deep political crisis. His term ended on January 20 when Biden was sworn in. Trump now lives in his luxury Mar-a-Lago estate in Palm Beach, Florida.

Confusion between federal and state governments about vaccine delivery

“Valheim” alluded to: Vikings on the survival trip

Eric Stehfest almost relapsed after the drama about his wife