The  winning streak of the German team manager Thomas Tuchel with Chelsea in the English Premier League is broken. After the game, Tuchel publicly criticized offensive player Callum Hudson-Odoi.

With the national players Timo Werner and Antonio Rüdiger in the starting line-up, the Londoners only scored 1-1 (0: 1) at FC Southampton coached by Ralph Hasenhüttl after their last five successes. Tuchel, with the Blues since late January, had five wins and one draw from his first six competitive games with Chelsea.

The  series ended because Chelsea initially found hardly any gaps against the very attentive defensive of the Saints. Mason Mount (54th) showed strong nerves from the penalty spot and equalized. Previously, Southampton had struck ice cold through Takumi Minamino (33rd), who was on loan from Liverpool FC.

However, Tuchel added, “everything will be forgotten again tomorrow” – and Hudson-Odoi has “still every chance” to recommend himself for further missions. For example, in the first leg of the first leg in the Champions League at Atletico Madrid on Tuesday.

For the Saints ended a negative run from the last six defeats in the league in a row. 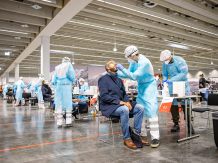