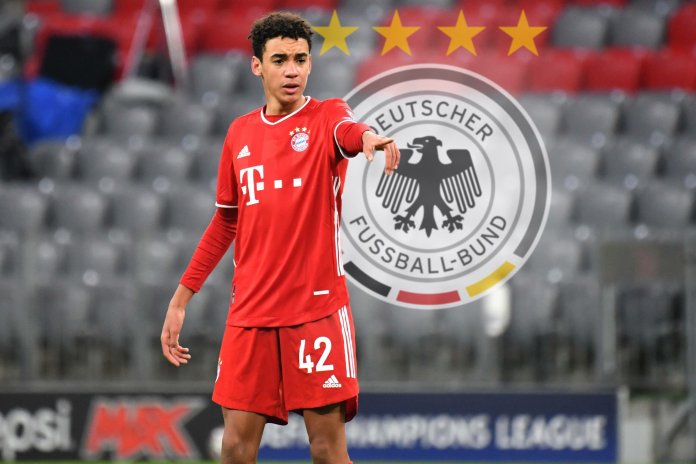 Good news for the German Football Association and especially for national coach Joachim Löw. According to English media reports, Jamal Musiala has decided to play for the DFB-Elf in the future. Accordingly, the attacking midfielder could celebrate his debut for the German senior team in March.

In the past few weeks there have been numerous rumors and speculations about Jamal Musiala and the question of which national team the top talent will play for in the future. In addition to German citizenship, the FCB professional also has English citizenship and made his debut in the U21s of the Three Lions last year.  The  “BILD newspaper” recently reported that the English association was ahead in the tug-of-war for Musiala. In England, reports are now making the rounds that the youngster would have chosen Germany.

As Rob Draper is said to have learned exclusively from the “Daily Mail”, Musiala will accept the invitation from national coach Joachim Löw to the German national team in March. England coach Gareth Southgate is also planning to nominate the 17-year-old attacking player next month, but according to Draper Musiala has chosen his country of birth.

This would be a great success for the DFB, as Musiala is one of the greatest talents in his class and has already proven his potential at Bayern this season.

According to Draper, Musiala will sign a long-term professional contract with the German record champions next week, immediately after his 18th birthday. He currently only has one training contract with FCB, which runs until 2022.

More FC Bayern news and stories are available at fcbinside.de

Teachers do not give German classes a good report

These niches provide protection in the event of a burst bubble

The EVZ captain moves on – Diaz leaves his heart club...

Australian Open: three zones – the fans have to decide tennisnet.com