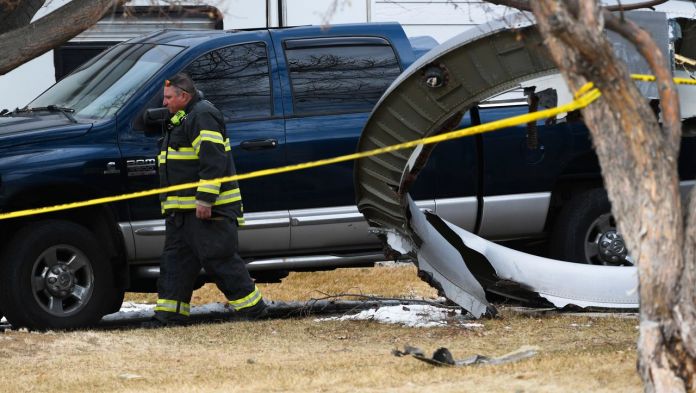 Just a few minutes after take-off, the pilot made an emergency call: near the US city of Denver, aircraft parts fell into a residential area after an engine fire.  The  United Airlines passenger plane had to make an emergency landing shortly after take-off on Saturday, the authorities announced.

The re were initially no reports of injuries – neither on board nor on the ground.

The  Denver suburb of Broomfield was affected by the incident.

“I’m honestly shocked,” said Broomfield police spokeswoman Rachel Welte. It is “astonishing” that, according to initial findings, no one was injured by debris in the place.

The  Boeing 777-220 with 241 people on board was en route from Denver in the state of Colorado to Hawaii. Shortly after take-off, the pilot noticed that the right engine had failed. On video recordings of a passenger it could be seen that the cowling of the burning engine had fallen off.
A large piece of debris fell in the front yard of a house in Broomfield, other parts of the aircraft landed on a sports field. Police spokeswoman Welte reported that people were mainly startled by the noise: “A lot of people said that they heard this really loud explosion that scared a lot of people, and then they saw what they thought was an airplane that came from Sky fell, but it was rubble. “

“Practically a shower of parts that fell from the sky”

It sounded like the sound barrier had been breached, eyewitness Kieran Cain told CNN. Everyone looked up. A “gigantic” black cloud of smoke could be seen in the sky and immediately afterwards the falling parts of the aircraft. “Virtually a shower of pieces falling from the sky,” said Cain.

United Airlines announced that the plane had safely landed in Denver. Most of the passengers flew to Honolulu on board a new plane. Those who did not want to travel further after the turbulence were accommodated in a hotel.

The  US Air Traffic Control Authority said an investigation into the incident will be launched.

The  Broomfield police called on residents not to touch the debris so as not to obstruct the investigation.

Falling aircraft parts injured a woman and child in Maastricht

According to police, two people were injured in a similar incident in the Netherlands.

The  police in Maastricht announced on Saturday that a fire broke out in one of the four engines of the plane shortly after a Boeing 747-400F freighter took off. Some pieces of metal fell to the ground above Meerssen in the north of Maastricht.

An elderly woman was hit in the head and had to be hospitalized. A child was also reportedly slightly injured and burned when trying to pick up debris from the floor.

Iran wants to reduce tensions with the US under Biden –...

DFB world champion before the end of his career? Everything... 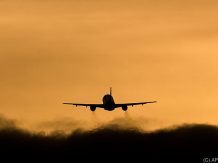 Corona travel warnings again for almost all countries in the world... Corona, Deutsche Bahn and the housing market – that will change...