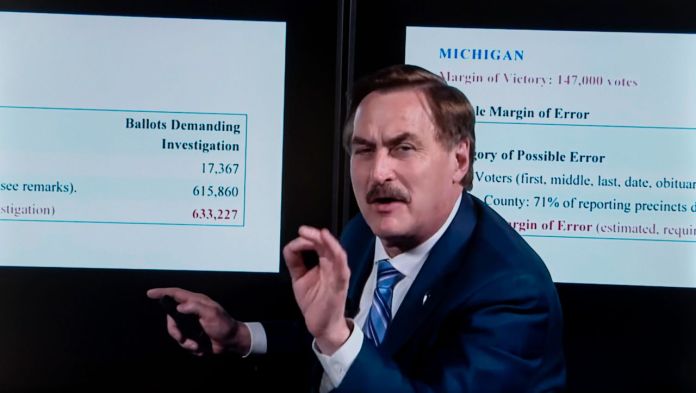 That the US election was “stolen” and that Donald Trump was the real winner – this lie stayed with the ex-president for a long time. Again and again his loyal followers made accusations of manipulation.  The  voting machine company Dominion has been taking action against these claims for several weeks with billions in lawsuits.
Dominion is suing Trump’s lawyer Rudy Giuliani and lawyer Sidney Powell, among others. Both are said to have alleged that the company cheated with its voting machines. Now, according to reports from several US media, the wave of lawsuits continues – against the entrepreneur Mike Lindell.

The  company My Pillow had “a defamatory marketing campaign against Dominion that has reached millions,” said the Wall Street Journal of the company’s lawyers.

Lindell is the founder of the pillow company My Pillow and a Trump supporter. He is said to have spread false reports about Dominion in the aftermath of the election campaign. Among other things, he had spread false reports on Twitter and in a specially produced video. In addition, Lindell financed a protest movement that wanted to support Trump in a two-week march to Washington and prevent the inauguration of Joe Biden. Dominion is now demanding $ 1.3 billion in damages, the same amount as in the Giuliani and Powell trial.
Dominion had already sued the two Trump lawyers in January. Giuliani is a close confidante of the former US president. Since November, the 76-year-old has been one of Trump’s most important helpers in trying to question his electoral defeat with baseless allegations of electoral fraud. He and Powell had made Dominion the focus of their allegations several times.

The  company, so the allegation, had actually counted Trump votes in favor of President-elect Biden.

The  company speaks of a “viral disinformation campaign about Dominion,” made up of “proven false” allegations.

No Angels are working on a new version of “Daylight In...

Two dead in a pile-up in Italy

Berlin & Brandenburg: Speeders without a license stopped: Driven under drugs

The capsule of the Hayabusa 2 spacecraft has landed safely on...