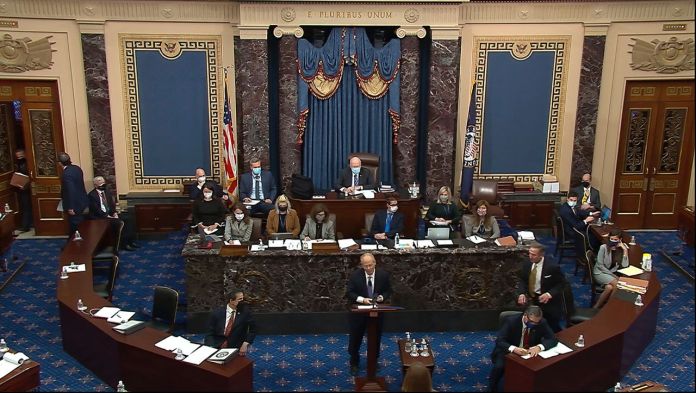 In the impeachment proceedings against Donald Trump, the ex-president’s defense lawyers have resolutely rejected the prosecutor’s allegations. It is an unjust, unconstitutional and politically motivated process, said lawyer Michael van der Veen in the US Senate.
Trump did not call for violence in his speech immediately before the storming of the Capitol on January 6.  The  Democrats’ claims that the then president incited the demonstrators were “absurd and monstrous lies.” It is “clear” that the Democrats “hate” Trump, said van der Veen.

Trump’s lawyers would have had two days to respond to the arguments of the House prosecutors. However, they completed their lecture after three hours.

The  senators then had four hours to answer questions on Friday night (CET).

The  final vote on impeachment could take place as early as the weekend.

Lawyer does not want to confirm Trump’s election defeat

When asked by Democratic Senator Bernie Sanders whether the defense lawyers believed that Trump won the election, van der Veen said, “My assessment is irrelevant in this process.”

The n he added, “In my assessment it is irrelevant for the issue this institution is dealing with. ”Trump did not admit his defeat in the November 3rd election to this day.

The  only relevant question is whether Trump’s statements were so inciting that they led to violence and riots, said van der Veen.

The  criticized statements in his speech were “ordinary political statements” covered by the right to freedom of expression.

The  attempt to selectively restrict freedom of expression is illegal.

(Maintain an overview: every working day around 5 p.m., SPIEGEL authors answer the most important questions of the day. “

The  situation in the evening” – profound, compact, free.

Here you can order your news briefing as an email.)

The  Democratic chief prosecutor in the House of Representatives, Jamie Raskin, was stunned by the statements of the lawyers. “Get real,” said Raskin, which in German means something like: “Wake up” or “Get back to the bottom of the facts”. Trump had incited his supporters at a rally on January 6th that the election victory had been stolen from him. Among other things, he said: “If you don’t fight like the devil, you will have no more land.”

In order to defend Trump’s alleged call to fight, the lawyers showed dozens of videos from the past few years in which prominent Democrats called for a “fight” against Trump and demanded his impeachment. “Fight hard for change,” said Senator Elizabeth Warren in one video, “I’m not afraid of a fight” in another.

Lawyers compare statements made by Madonna

The  lawyers did not stop at the pop icon Madonna either.

The y showed two older videos from the music superstar in which she talks about blowing up the White House. “Any political utterance should be protected, equally for all of us,” said van der Veen. Madonna had campaigned for Trump’s opponent Hillary Clinton in 2016.

Raskins said, “How gullible do you think we are? We saw it happen. ”

Another defense attorney for Trump, David Schoen, accused the House of Representatives of relying on unconfirmed media reports and manipulated evidence to harm the ex-president. In their presentations, the prosecutors also relied on Trump quotes that were deliberately taken out of context, said Schoen.

Van der Veen again emphasized that the process was unconstitutional because Trump had already left office.

The  Democrats are only concerned with “trying to disqualify their political opponents.”

The  majority of the Senate decided on Tuesday that the procedure initiated during Trump’s term of office was constitutional. Van der Veen accused the Democrats of being driven only by “hatred” of Trump. “This kind of political hatred has no place in our political institutions,” he said.

Trump is accused of “inciting a riot”

The  impeachment process is managed and decided in the Senate.

The  Congress Chamber takes on the role of a court.

The  prosecutors set out their allegations against Trump on Wednesday and Thursday using dramatic video recordings and a meticulous retelling of the attack on the Capitol.

The y accuse Trump of having prepared the ground for the attack with his election fraud allegations for months and ultimately having deliberately instigated and orchestrated the outbreak of violence.

The  prosecutors also accused Trump of showing no remorse and of later calling his statements at the rally “perfectly appropriate.”

The  Democrats want to lock Trump with a conviction for future political offices at the federal level.

The y argue that Trump needs to be held accountable by the Senate so that he cannot call for violence again in the future.

The  threat from fanatical Trump supporters persists, they warned

The Bitcoin bull run is heating up – and altcoins are...

Queen Elizabeth: will the palace be silent about the second corona...

Meghan and Harry in a TV interview: Dates and times for...

Swiss zeros in the “giant” – Odermatt: “This is the biggest...