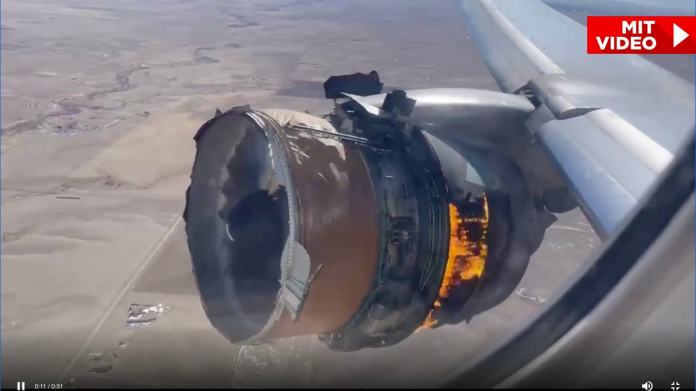 The y were pictures like from an action film: a view from the airplane window. Airy heights. OH GOD, THE ENGINE IS BURNING!

241 people on board. Fear of death! Metal parts crash into the ground.

The  horror on the way to Hawaii!

After the engine failure of a Boeing 777 not far from Denver in the state of Colorado, the US aviation authority FAA (Federal Aviation Administration) has now announced consequences.

Machines of this type, which are equipped with certain Pratt & Whitney engines, should be intensified and checked immediately, said FAA chief Steve Dickson on Sunday (local time) and announced a corresponding emergency policy. “This will likely mean that some aircraft will have to be taken out of service.”

The re were no reports of injuries – either on board or on the ground. According to the FAA, the right engine of the machine failed shortly after takeoff.

United Airlines announced that it will immediately voluntarily remove 24 Pratt & Whitney 4000 Series Boeing 777 aircraft from its flight plan as a precautionary measure. It should be ensured that these aircraft meet the strict safety standards and can be put back into service.

Everything stays different in the ARGEkultur

Bitter what they have to endure now

Geiger and Eisenbichler before Innsbruck jumping in chill mode – dpa

Corona: Germany will only receive four million vaccine doses by the...