Hero in the corona crisis

When the coronavirus swept through New York at the beginning of 2020 and caused the number of cases to skyrocket, the state governor – Andrew Cuomo – stepped forward, passed new laws, spread hope and presented himself as the savior in need. Indeed, the 63-year-old made a good impression.

The  more he seemed to get the coronavirus under control, the better his reputation got – and it wasn’t always good.

Was solid as a rock during the Corona crisis: Andrew Cuomo. Image: keystone

In March 2020, he announced new rules and introduced a law that he named after his mother: Matilda’s Law. Emotionally and passionately, he speaks to the citizens of New York in the conscience, holds daily public press conferences, shows that he is anxious and concerned. In addition to the incompetence of Trump, who apparently cared little about the virus, Cuomo can score. Hymns of praise are sung from all sides, the hashtag CuomoForPresident is making the rounds on Twitter:

“Andrew Cuomo is the control freak we need now,” writes

The  Washington Post” twice a week later to. Watson also reports in good tones about his fight against the corona virus:

Everything is going well – so well that in October 2020 he will publish a book entitled “Leadership lessons from the Covid-19 pandemic”, making it onto the bestseller lists.

Finally, at the end of January, his image is in danger.

It starts to simmer

The  number of fatalities in nursing homes who died of Covid19 is likely to be around 50% higher than official figures suggest. Attorney General Letitia James burst that bomb on January 28th. Governor Cuomo’s administration never stated how many residents of nursing homes died in the hospitals, she writes in a 76-page devastating report.

«Even if we cannot bring back the people we lost in this crisis, this report is intended to offer the transparency that the public deserves. It is intended to encourage greater measures to protect our most vulnerable residents. “

In addition, some nursing homes reported too few deaths and insufficiently complied with corona measures. Investigations were launched against 20 nursing homes.

After this report was published, Howard Zucker, a member of the Corona Taskfore, finally published a revised number, which on January 19 was 12,743.

The  drama came to a head after it was revealed on February 11 that the Cuomo administration had deliberately withheld the numbers. It should be prevented that the then President Trump would politically use the true statistics against them, Cuomo’s top advisor Melissa DeRosa explained the procedure in an internal video chat:

MP Ron Kim, who had also attended the video conference, told the New York Post that DeRosa’s explanations sounded as if they had something to hide.

Following the release of James’ report on January 28, Cuomo appeared in front of the media the following day. However, his appearance was unable to restore its almost flawless pandemic image – on the contrary. Instead of wrestling through to an apology, he tries to focus on his supposed achievements:

However, this statement in particular caused widespread outrage:

Now the FBI and the US Attorney’s Office in the Eastern District of New York have opened an investigation into him.

The  focus of the investigation is his dealings with nursing homes in the coronavirus pandemic. In view of this development, calls for resignation are being voiced even from among his own ranks. Some Democrats also want Cuomo to take his emergency powers, which were given to him during the pandemic – including Ron Kim.

Cuomo shows his angry side

If you allow yourself to criticize Andrew Cuomo, you have to be prepared for something. On February 11, he received a phone call from Cuomo, Democratic MP Kim told the New York Post. He asked Kim for support in order to keep the damage of the cover-up of the numbers in check and did not hesitate to threaten him:

On January 29th, Cuomo himself revealed to the media that everything has not been going well for a long time:

The re had long been a gap between him and the health experts when it came to dealing with the pandemic. According to the New York Times, nine corona experts have now thrown in the towel because Cuomo never listened to them. With the controversies that have become public in recent weeks, this gap has now opened up between him and the residents of New York. He is likely to have made his chances of re-election as governor of New York in the coming year much more difficult.

A transfer that changes the hockey map: Raeto Raffainer (39) is the new head of sports at SC Bern. Why did he leave Davos? Which role remains Florence Schelling? Does he want to succeed Marc Lüthi in Bern?

Two years ago we sat at the table for an interview. Back then, you passionately described your mission to us: to get the HCD back on track, Bündner for Bünderland. You designed the strategy and brought your friend Christian Wohlwend with you as a trainer. And now you’ve left the HCD bang for sure.

The  word “treason” was used in this context. Raeto Raffainer: As far as I know, only you spoke of “treason”. No one else. Shock in the final! Spectators are stunned 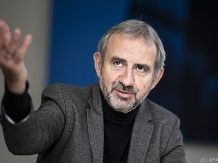