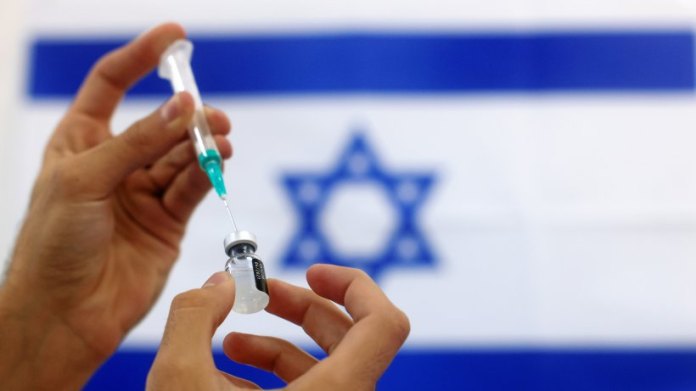 Berlin.
Out of the lockdown: In Israel, people are allowed to go to the gym, hotel or theater again – but only if they are vaccinated.

After months of lockdown with the toughest restrictions on fundamental rights in decades, many Germans look hopefully Israel. Since Sunday, more than three million Israelis who have already been vaccinated or have recovered from an infection have been allowed to travel to fitness studios, hotels, the theater or soon abroad.

The  ticket for the first big steps back to normal is a green vaccination certificate. This is in the App Ramzor (German traffic light) saved on the smartphone and presented.

This spectacular step in Israel is made possible because of the Corona vaccine by Biontech and Pfizer apparently more than 90 percent prevented the transmission of the virus to other people. At least this is the result of an as yet unpublished observational study by companies and the Israeli Ministry of Health. If the numbers are confirmed, it could be a turning point in the pandemic. Now there are increasing voices in Germany calling for a rapid abolition of restricted freedoms for vaccinated people.

Corona vaccination – More about the vaccines:

Is the federal government ready to quickly give back their rights to those who have been vaccinated?

Federal Minister of Justice Christine Lambrecht is in favor and explicitly refers to Israel. “I can very well imagine hoteliers or restaurateurs saying that access is possible for people who have been vaccinated,” said the SPD politician at ntv. People who could show a negative rapid test should also have access to relaxation.

Vice President of the Bundestag Wolfgang Kubicki (FDP) argues similarly: “Since it now seems certain that there is hardly any risk of infection from vaccinated people, the restrictions on fundamental rights for these people must largely be lifted.” This dictates “our constitutional order”.

Lower Saxony’s Prime Minister Stephan Weil is also in favor of giving vaccinated people who have tested negative for Corona more freedom. “More and more people will gradually be vaccinated,” said the SPD politician to our editorial team. “If there is then no longer any risk of infection, a visit to a restaurant and other things might also be possible.” As a second way, Weil named tests with negative results. “If the new generation of rapid tests is easier to handle and at the same time reliable, it opens up completely new perspectives.”

What do experts think of quick freedoms for vaccinated people?

SPD health expert Karl Lauterbach does not see the Israeli research results as a possible way out of the harsh pandemic regime. A quick return of civil liberties is “absurd”, Lauterbach told our editorial team. “It will take until the middle of the year before we have even vaccinated the risk groups.”

The  chairman of the World Medical Association, Frank Ulrich Montgomery, positions himself much more openly.

It should of course not be the case “that the immune system can immediately drop all masks”. Because then you would no longer be able to control the mask requirement of the non-vaccinated in a busy shopping street. “

The re all masks will still have to wear. But going to restaurants and the cinema, flying without annoying smears and traveling in the EU without quarantine restrictions – that would be possible, “said Montgomery.

Looking ahead to the next one, scheduled for March 3rd Bund-Länder summit Preparations for a gradual exit from the corona lockdown are in full swing. Chancellor Angela Merkel suggested package solutions for three social areas in combination with increased corona tests in the CDU presidium on Monday, according to participants. Merkel named personal contacts, schools and vocational schools as well as sports, restaurants and culture.

Chancellor Merkel was quoted as saying that “opening steps with increased tests must be introduced wisely”. Because the spreading mutations are about to destroy the previous lockdown successes. In numerous federal states, schools nevertheless started to offer face-to-face teaching. On March 1st, hairdressers nationwide are allowed to cut hair again.

Are there enough quick tests for loosening?

Federal Minister of Health Jens Spahn (CDU) created this impression. As early as March 1st, he wanted free rapid tests for everyone. But nothing will come of it for the time being. At a meeting of the Corona cabinet, Chancellor Merkel pushed through that the start should be postponed to March 8.

The  rapid test strategy is then to be linked to the step-by-step plan for easing, which is to be adopted at the summit on March 3. According to the government, Germany has so far reserved 800 million rapid tests. Self-tests for personal use are to be approved soon.

“It must become unprofitable to breed a lot of cows!”

Sad news for Christmas: Amira breaks down in tears in front...