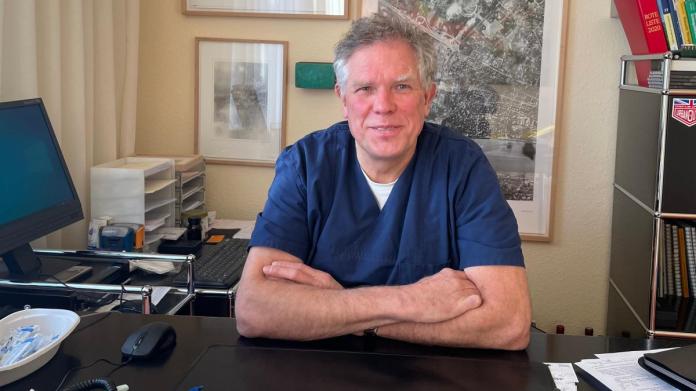 “So that means that we have 15 percent fewer vaccinations”

Vaccine doctor Hans-Christian Meyer recently announced that he had been given permission to draw seven instead of six doses from a Biontech ampoule. That meant around 15 percent more vaccine. But now it has been stopped.

Ivaccine is scarce in Germany. That is why the doctor Hans-Christian Meyer, one of three leading vaccinators in the Rheinisch-Bergisches Kreis, was looking for a way to get seven instead of six vaccine doses from a Biontech / Pfizer vaccine ampoule. His solution: the use of special zero residual syringes. As a result, around 15 percent more vaccine would be available at once. Meyer was convinced of the idea and therefore fought for the use of the syringes.

He actually received approval for the procedure for a pilot project. But now the sudden U-turn:

The  NRW Ministry of Health has again banned him from using the zero residual syringes. Instead, the conventional syringes should be used again.

After this decision, WELT reached Meyer at the vaccination center, where he and his employees vaccinated more than a hundred people on Sundays.

The  decision of the ministry is completely incomprehensible to him, as he explains when asked.

WORLD: Mr. Meyer, you had the idea of ​​getting seven instead of six doses and thus around 15 percent more out of a Biontech ampoule, and the express permission of the NRW Ministry of Health. What happened then?

Hans-Christian Meyer: Someone from the ministry complained to the Association of Statutory Health Insurance Physicians that I was not authorized to give instructions to the pharmacists in our vaccination centers, who draw the syringes. But when I showed the syringes to the pharmacists and pharmaceutical technicians working at the vaccination center, they were thrilled. In the days when they were allowed to work with the syringes, they were convinced of the quality. You regret not continuing to use it. I suppose the move came from a pharmacist advising the ministry.

WORLD: What does that mean for you now?

The  ministry has informed me that I can no longer use the zero-residual syringes, which allow you to draw seven instead of six doses from an ampoule. That came very suddenly because I actually already had permission from the Ministry of Health. My idea of ​​being able to vaccinate many more people in this way with the help of the model experiment had a positive response from the public.

WORLD: How do you feel about the process?

Meyer: I am shocked. And shaken. I don’t understand how bureaucrats who have little idea about our work on site now tell me that I have to go without a seventh dose. Because with the normal syringes that I am supposed to use again, it is hardly possible to draw a seventh dose from the ampoules.

The  letter says “until clarification”, but that is a prohibition in good German. Nobody knows how long it will take.

So that means we have 15 percent fewer vaccinations. You have to take into account the fact that we have too few vaccinations in Germany. If we don’t have something right now, that’s time. It should be vaccinated as soon as possible.

The  day before yesterday I read the headline “We have to vaccinate faster”. And we have already successfully vaccinated with the zero residual syringes as part of the model test. As a friend of mine said: This is the government madness in Germany.

WORLD: How many people do you vaccinate at the vaccination center?

WORLD: Isn’t it also a good thing that care is taken to ensure that the syringes are safe?

Meyer: Why shouldn’t the syringes be safe?

The y’re safe because they’re certified.

The y are used millions of times in the Netherlands, an EU country.

The y are also specially tailored to Covid-19 vaccinations.

Meyer: I should now write a statement with the pharmaceutical director of the vaccination center on the syringes provided by the ministry and the zero residual syringes.

The n the Ministry of Health wants to make a “new assessment”. Until then, I am not allowed to use the new syringes. Union at its lowest value since March 2020: Grand coalition loses its majority in the poll – politics

Unexpected innovation in Messenger from January 2021

Flachau: Women beat men when it comes to prize money

Consumers are likely to storm stores on the Monday after the... Journal Frankfurt Nachrichten – When the ticket inspector freaks out