Vodafone has had massive problems with the Internet since midnight (February 18). Users vent their anger with comments.  The  problem has now been resolved.

The  portal reported on Thursday evening around 8.15 p.m. allesstoerungen.de: “No disruptions at Vodafone.” Many German households should have breathed a sigh of relief, at least at prime time – but of course the day in the home office was over for most customers at that time. All day long they had to struggle with massive disruptions in their Internet connection – those who also have DSL connections were also unlucky. Not only Vodafone customers were affected, but also those of the subsidiary Unitymedia.

Large cities such as Berlin, Hamburg, Stuttgart, Munich, Dusseldorf, Essen, Dortmund and Cologne were particularly affected by the persistent disruptions, in some cases including their surrounding metropolitan region. 1275 reports were recorded allesstoerungen.de at 1:21 p.m. – at 9:51 p.m., less than half of the 571 reports were received compared to the peak of the disturbance on Thursday afternoon. Whether the problem has really been resolved will only be seen on Friday in the next few hours. Because after hardly any malfunctions were announced during the night, the value is currently leveling off again at a level of around 600 reports – and the trend is rising.

At 5:39 the first user of the online portal wrote: “Something urgently needs to be done for the benefit of the customers.

The re is an urgent need for action. Home office is not possible – no landline network and permanent Internet crashes. ”“ That is an imposition – the 3rd or 4th disruption since last Monday ”, reported another customer here around 8:30 am.

The  lines in the service center of the Internet provider have apparently been running hot over the last few days.

The  Vodafone service also asked its customers for forgiveness online using the same wording over and over again – and above all patience: “Please forgive the delay. We are currently getting more tasks and challenges than usual. ”

Munich – Vodafone is the second largest Internet provider in Germany. Now a fault has paralyzed the network of the Telekom * competitor. Customers of the provider and the subsidiary Unitymedia are increasingly complaining about a failure of the Internet – across Germany.

Just after midnight ran on the site www.allestörungen.de

The  first error reports came in, and the number kept increasing.

The  problem did not seem to have been resolved by Thursday morning either. At 5:30 a.m. the number of reports increased again.

Vodafone: Internet paralyzed in many regions of Germany

The re were numerous complaints from Düsseldorf, Cologne, Stuttgart and Frankfurt am Main.

The  hotspots of the Vodafone disruption include Hamburg and Berlin, such as hna.de* reported. Vodafone repeatedly struggles with disruptions. In the past year there were Internet problems with almost all major providers.

The re were thousands of comments from angry Vodafone customers by morning. One user wrote: “I’ve only had problems here since last night, but what the heck … people, getting excited doesn’t do any good. As we all know, the internet and all that stuff has been uncharted territory for at least 20 years … Even in Indonesia I have better and faster internet connections than here, strange. “

Malfunction at Vodafone: Internet users vent their anger in forums

Another customer complained about the price-performance ratio: “I am paying more than ever before. Apparently I have the best internet connection available. Unfortunately, I don’t notice anything about it. Constant disruptions … the biggest joke! “

Vodafone customers also complained on Twitter: “Unfortunately, this morning no more meaningful work is possible with your connection.

The  Internet is unusable. ”Another wrote:“ And again a malfunction in the cable connection. Ergo, no internet and phone. For each failure one euro and [ich] doesn’t need to work anymore. “

However, one user overshot the target. At allestörungen.de she wrote: “Once again everything is dead here in Chemnitz.

The  last shit shop, when you call there, you need an interpreter first, because the German language doesn’t speak and I don’t know anything, but we’re allowed to pay. ”Another user then reprimanded her:“ Vodafone is shit and I have too constant problems. But what exactly does that have to do with the origin of the employee? Can you stop with your subliminal racism? That sucks too. “

Vodafone has not yet commented on the disruption.

The  company preferred to advertise its uncomplicated switching service on Twitter. * Merkur.de and hna.de are part of the nationwide Ippen-Digital editorial network. (where / so)

Britain plans up to 50 vaccination centers

Stress increases at every age: How does lockdown affect the psyche?

Burglary in Stuttgart-Feuerbach: Pedelec and drill stolen from apartment building –... 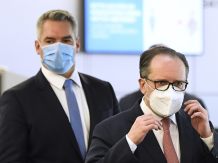 Government sees no danger of vaccination plans despite corona mutation –...

More than 130 drug deaths this year