“We feel betrayed by the government”: residents are demanding an immediate stop at the Sonneblick asylum center

After the first asylum seekers moved into the new Sonneblick asylum center in Walzenhausen on Monday, residents are now speaking. In a letter they demand an immediate move-in stop.  The  Ausserrhoder government did not adhere to a written agreement that was part of the building permit, they say.

The  canton rejects the allegations.

The  Walzenhausen community also contradicts this.

For five years, Hanspeter Baumgartner fought – as part of the “Residents Sonneblick” committee – against the new asylum center in Walzenhausen, which officially started operating on Monday. And he still does not give up: “We feel passed over by the government and those responsible for Sonneblick,” says a circular that Baumgartner sent on behalf of the committee to the Walzenhausen community, the Ausserrhoder government, lawyer Werner Ritter and the Sent the press.

In it, the committee accuses the canton of failing to adhere to the agreement that was signed between the opponents and the client in October last year. “An absolute cheek” is Baumgartner’s comment. For this reason he demands an immediate stop to move in at the “Sonneblick”.

“No emergency number received yet”

After years of legal dispute that continued until the Federal Supreme Court, on September 17, 2020 the Walzenhausen Building Permit Commission granted the Sonneblick Foundation permission to convert the Güetli property into an asylum center. In contrast, the residents filed an appeal with the Department of Construction and Economics on October 12th. However, the parties were able to come to an agreement and concluded an agreement, which is available to the “Appenzeller Zeitung”.

In this, the canton of Appenzell Ausserrhoden committed itself to delivering the fire protection concept, the definitive care and operating concept, a traffic concept for the access road and a Covid-19 concept to the recurrent before the opening of the asylum center.

The  canton also assured the runners-up, and thus the recurrent users, that they can reach a contact person by phone at any time in the event of problems at the asylum center.

The  corresponding telephone number will be announced to the initiators and the recurrent users as well as the entire population before the asylum center opens, according to the agreement.

Hanspeter Baumgartner now says that until the opening of the asylum center on Monday only a few points from the agreement had been observed. Furthermore, he did not know anything about the opening. Baumgartner says:

“We learned from the press that the first asylum seekers will move in on Monday.”

Baumgartner claims that the agreement is part of the building permit.

The  fact that the canton does not adhere to this agreement makes him angry: “It is not exactly trustworthy when decisions are simply made over our heads.” For this reason, he calls on the Walzenhausen municipal council to stop the opening in the “Sonneblick” until “the above points have been met and adhered to”.

Baumgartner also questions whether the concepts mentioned were presented to the Walzenhausen community. However, community president Michael Litscher waves it away. On request, he will inform you that the protocol of the building acceptance test of February 18, 2021 shows that the supplementary and adapted concepts stipulated in the conditions will be available to the building authorities on February 16, 2021.

The  same applies to the acceptance report from Assekuranz AR. “In terms of building law, the asylum center can thus be moved into.”

Litscher also points out that the agreement is not – as the residents’ committee claims – an integral part of the building permit. “

The  canton rejects the allegations made by the residents’ committee. You are “baseless and wrong”, it said in a press release. All concepts for operating the asylum center were sent to the responsible legal representative on the same day after the building was accepted on Thursday, February 18, 2021.

The  canton has thus fulfilled the relevant agreements. 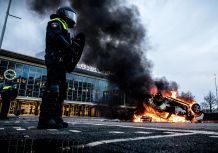 Riots at anti-corona demos in the Netherlands – world

Bernie Sanders at Seth Meyers about his meme: This is how...