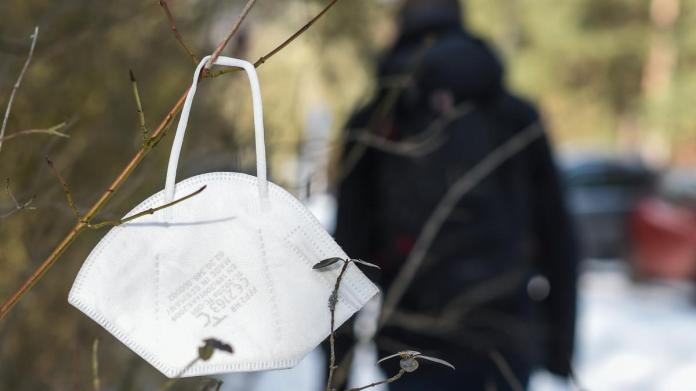 Wearing an FFP2 mask outside – what’s the point?

In spring weather it got tight in many urban parks at the weekend. Some people therefore decided to wear an FFP2 mask outdoors. Experts are rather skeptical about the benefits.

When the sun is shining and the temperatures are climbing, people are driven out of the house. Some then voluntarily wear their FFP2 masks in the open air to protect against the coronavirus, even when they are out and about on wide streets or in parks. How useful is that?

Claim: If you really want to protect yourself from Corona, you also have to wear an FFP2 mask outside

Rating: Not used. Nationwide, either simple surgical masks or particle-filtering FFP2 masks must be worn on public transport and in shops.

The  former primarily protect the person opposite, the latter also protect the wearer themselves.

The  reason for this is probably the fear of getting caught in a so-called aerosol cloud.

This forms in everyone by exhaling in front of the mouth and can contain coronaviruses in infected people. When people talk to each other, these aerosols are practically blown in the face of the person talking to. While viruses can collect in unventilated rooms, the exhaled air in the open air is quickly diluted and transported away, according to the Society for Aerosol Research (GAeF) in Cologne.

The  amount of viruses that you might get off in passing is not enough for an infection, the advisor to the European Medicines Agency (EMA) recently told Deutschlandfunk Kultur. “Jogging, running, hiking, walking, I consider that to be absolutely harmless.”

The  GAeF also gives the all-clear in its position paper: “

The re are almost no infections caused by aerosol particles outdoors.” However, caution should be exercised in groups in which no minimum distances are observed and / or masks are not worn – for example during longer conversations .

So far, for the Robert Koch Institute (RKI), people who stand together with an infected person for longer than 15 minutes without any protection and less than 1.5 meters apart are considered to be contact persons with a “higher risk of infection”.

When the mask can become a risk

On the other hand, wearing a mouth and nose cover for too long can be quite counterproductive: because the moist exhaled air reduces the effectiveness of the FFP2 masks.

The  GAeF warns that the material will lose its electrical charge over time.

The  Federal Institute for Drugs and Medical Devices (BfArM) writes: “A moistened mask should be removed and changed.”

According to the Fraunhofer Institute for Industrial Mathematics in Kaiserslautern, there is also the risk of a so-called infection bridge between the wearer and the environment: In the case of moist material, even with FFP models, for example, coughing or sneezing could throw droplets from the outer surface of the mask into the environment .

“Odyssey of the Seas” in Bremerhaven: Corona cases on cruise ship in Germany: Workers are stuck

MV Summit: Results only in the evening | NDR.de – news

Aldi: Big rush for corona self-tests all over Germany

Opinion divided on Corona self-tests at Aldi in Cologne: “Money making for me”

In summer under two conditions: Brown: Then we return to normal

David Alaba? “We went to our limits”

Arrested after transporting marijuana through Berlin

Real Madrid celebrate their third win in a row