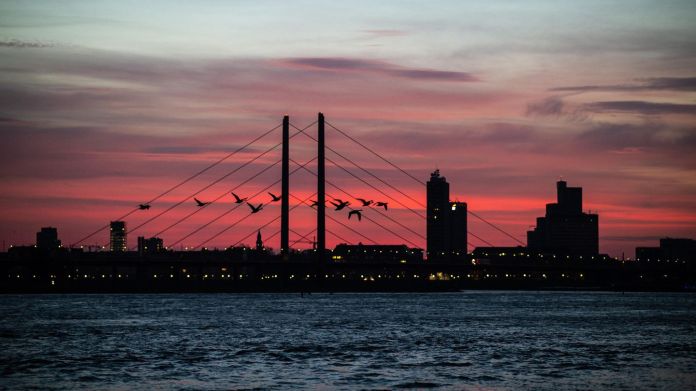 Sunrise in front of the silhouette of Düsseldorf with the Rheinkniebrücke. Saharan dust over Germany is likely to cause spectacular sunrises and sunsets in the coming days.
© Jonas Güttler / Picture Alliance

A high pressure area promises us more sunny days this week. And then there is the Saharan dust that will show up over Germany from Monday.

The  sunrises and sunsets could be particularly beautiful now.

After the spring-like weekend, the high “Ilonka” will give people in Germany plenty of sun in the coming days.

The  temperatures remain very mild in many places with highs of 15 to 20 degrees, reported the German Weather Service (DWD) on Monday.

But the sky doesn’t turn bright blue everywhere. Especially in the south-east in the Danube valley, night fog can last well into the afternoon, it was said. In the course of the week, the fog also “caught” regions in the central low mountain ranges.

The  fog then not only obscures the view, the temperatures are also noticeably cooler with values ​​of four to seven degrees.

But not only fog, also the Saharan dust, which reaches Germany with the south to south-westerly currents, can at least at times make the sky appear milky and cloudy. However, colorful sunrises and sunsets should be a positive side effect, according to DWD meteorologist Sebastian Schappert. Clouds are only to be expected in the far north. But it remains largely dry.

See in the video: In Düsseldorf, the public order office was active on Sunday, because in many places the good weather made it difficult to comply with the corona protective measures.

Nine dead in a bus attack in Syria

The “The Voice” talents get star support in the final

Why the iron people love Augsburg

A day with “lateral thinkers” in Frankfurt: Corona deaths would have...

Covid tongue: When the mouth gives the first signs of infection

Sport 1 takes a position on statements made by Steffen Freund