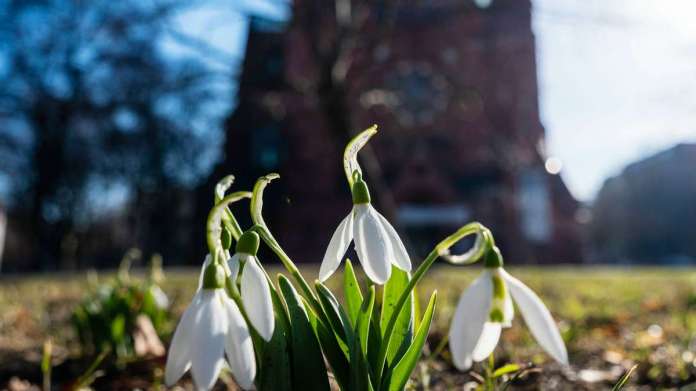 Temperatures of up to 20 degrees create spring fever on weekends in Germany. But is winter over for good?

The  polar vortex could put March hopes on hold again.

Offenbach / Munich – After the bitterly cold winter days of the past few weeks with extreme snowfall and minus degrees in the double-digit range, spring now seems to be breaking out in Germany. At the weekend the temperatures reach almost 20 degrees, especially on the northern edges of the western low mountain range. Walkers across the country drove outside in droves on Saturday. According to Felix Dietzsch from the weather forecast center of the German Weather Service (DWD) it will be even warmer on Monday or Tuesday.

The n, according to his forecasts, the 20-degree mark could be broken more frequently.

With 14 to 15 degrees it is not quite as warm in the eastern half of the country, but it is also spring-like. In the course of the coming week, the maximum temperatures along the North and Baltic Sea coasts will only rise just above the mark of 10 degrees.

March-winter on the march? Polar vortex could put spring on ice again

But apparently the winter has not yet finally passed. An icy comeback cannot be ruled out in March. According to RTL meteorologist Björn Alexander, the reason for this could be the so-called polar vortex. “

The re are increasing signs that he can regenerate a little. However, it is often the case that it takes around 10 to 14 days until we feel the effects of this quite complex process in our weather too, ”says the expert from wetter.de quoted.

The  “reverberation of the polar vortex”, as the meteorologist calls it, could therefore influence the weather in Germany for even longer.

The n it could stay very cold on March 1st despite the meteorological beginning of spring, as well heidelberg24.de reported.

Weather model calculation: Spring in Germany only at the beginning of April?

The re are also model calculations that calculate 15 degrees and more for the end of March or even the beginning of April. “It is still completely open where the regenerated polar vortex and its core will ultimately be located and whether we will be on the cold side again at the end of February or in March,” says Alexander.

Meteorologist Corinna Borau’s assessment is similar wetter.com. “In any case, a lot is possible in March in terms of temperatures,” she explains in the video and also refers to long-term forecasts by the US weather agency NOAA. This would dampen the temperature trends of the past few weeks again for March. And a look at the weather conditions would also lead to “not really a spring-like weather situation” for March 1st.

Anyone who has finally had enough of winter and needs a little more optimism about the start of spring could be more pleased with the DWD’s trend forecast. “Slightly inconsistent; partly cloudy, but hardly any rain. Still too warm for the time of year ”, the weather service summarizes its long-term forecast up to March 2nd. A new onset of winter is therefore less likely to be feared here. (va)

AIDS: Against discrimination in the workplace

Jan Schlaudraff wins the case – 96 has to pay more

Daniela Katzenberger: She is disgusted with the corona smear