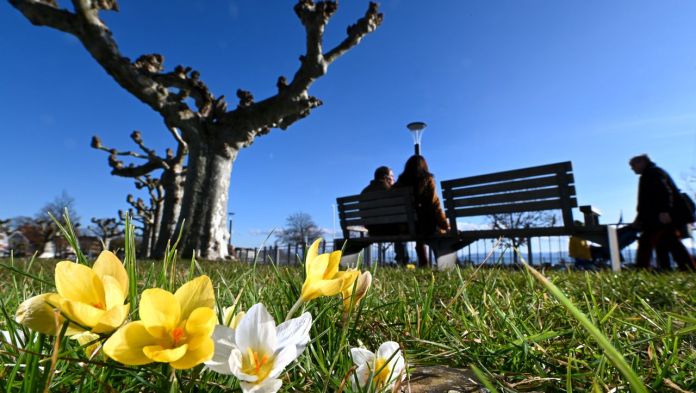 A short while ago still shivering in freezing temperatures, now spring fever in winter: Mild temperatures are currently pulling many people in Germany outside. For example, Berliners were already picnicking in the morning sun in the Mauerpark in the Prenzlauer Berg district.
However, the police did not detect a rush to excursion areas in Bavaria until noon on Saturday: Upper Bavaria did not report any columns of excursionists to the local recreation areas in the foothills of the Alps.

In Berlin, strollers rediscovered one of their favorite pastimes: selfies in front of the Brandenburg Gate.  The  Museum Island and the pleasure garden in front of the Berlin Cathedral also filled up. Meanwhile, the Berlin police announced major controls in parks for Sunday to ensure compliance with the corona rules despite the spring mood.

20 degrees in February – and hardly any rain

The  German Police Union (DPolG) warned on Friday of an increase in violations.

The  nice weather could tempt you to be careless, said the chairman Rainer Wendt. “Sun rays are not a corona vaccine – some forget that.” Wendt appealed to people to adhere to distance rules and contact restrictions despite spring-like temperatures.

After frost and snow last weekend, in some places it feels almost like summer in some places. On Sunday, almost 20 degrees are possible on the northern edges of the western low mountain range, as Felix Dietzsch from the German Weather Service (DWD) said.

The  meteorologist expects the climax of the warm phase on Monday or Tuesday.

The n the 20-degree mark could be broken more frequently.

At first it will not be quite as warm in the eastern half of the country. According to the DWD, only 14 or 15 degrees are usually expected on Sunday. “

The  thermometer only climbs towards 20 degrees here in the middle of the week,” said Dietzsch. Basically, it stays cooler along the North and Baltic Sea coasts. Here the maximum temperatures will rise only just above the mark of 10 degrees in the course of the coming week.

The re will be no signals for precipitation again until the end of next week,” said the meteorologist. “Until then, apart from a few drops in the far north, it will remain dry across the country.”

“Death Threats That Are Hard To Take”

New variant of the coronavirus appeared in Japan