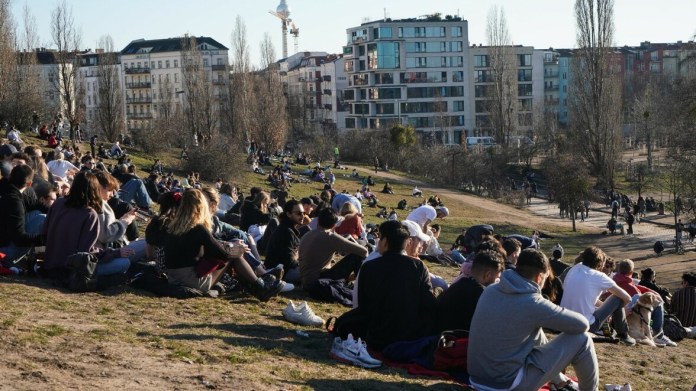 A few days ago the winter jackets could hardly be thick enough, now a sweater is sometimes enough in the sun: High “Ilonka” gives Germany spring-like weather.  The  high is over southeast Europe and make no move to disappear from there, it said on Sunday from the German Weather Service (DWD) in Offenbach. “A change in the weather situation does not appear before the coming weekend at the earliest,” explained meteorologist Marcel Schmid from the DWD weather forecast center.

Thousands of Berliners are drawn to the parks and nature

On Saturday and Sunday, thousands of Berliners were already drawn to the parks and nature. An estimated 1,800 people came to the Gardens of the World on Sunday lunchtime, a police spokesman said. In the Volkspark Friedrichshain there were even 2000. In the afternoon it could have been even more, they said.

According to the police, families mostly flocked to the parks. Young people played volleyball in the Volkspark. Joggers took advantage of the good weather, as did children who let off steam in playgrounds or ate an ice cream.

The  police spokesman said on Sunday at noon that people had largely complied with the corona minimum distances. With more than 100 emergency services, the police carried out so-called “focus controls” in local recreation areas and parks: for example in Mauerpark, Görlitzer Park, in Hasenheide, on Tempelhofer Feld and at Park am Gleisdreieck.


Picture gallery
Is the winter over? Cottbus is testing the early spring

In the afternoon, numerous young people sunbathed on the Admiral Bridge in Kreuzberg. Police officers then spoke to them personally, either to leave the place or to wear a mask, as observed by a dpa photographer.

The  police spokesman also said that emergency services had asked for breaks on football and basketball courts in other places.

Numerous bikers took to the streets on Sunday. Hundreds of them gathered on the Spinner Bridge on the Avus.

The  police spoke of 300 to 350 motorcyclists. Violations of the Infection Protection Ordinance were also found there in isolated cases, it said. However, the officials did not have to intervene on a large scale.

Numerous walkers in the Branitzer Park in Cottbus

The  spring-like weather lured the Brandenburgers outside at the weekend. After days of permafrost and snow, many people in Potsdam’s city center enjoyed the sun’s rays at temperatures of up to 17 degrees. Not all wore mouth and nose protection as prescribed, as a dpa reporter reported. At the weekly market at Nauener Tor it was as full on Saturday as it was before the Corona period.

The  Babelsberg Park was also full of visitors. In the Fürst-Pückler-Park Branitz in Cottbus there were also numerous walkers on the weekend.

The  reopened game and zoo saw a rush of visitors. According to director Jens Kämmerling, the Cottbus zoo was “well lively”. You can feel the good mood about finally being able to be outside again.

The  visitors are disciplined and adhere to the mask requirement in the zoo, he reported. First, animals could be visited in the outdoor enclosures.

The  animal houses are still closed.

The  police in Brandenburg recorded 83 corona-related missions nationwide on Saturday. In Rangsdorf (Teltow-Fläming), the police ended a wedding celebration on Saturday in an apartment with 36 people. Police spokesman Torsten Herbst estimated a similar incident on Sunday.

The  number of accidents is in the “normal range” despite the many excursionists.

The re, the police said they saw a number of cars from neighboring federal states, so checkpoints were set up at the town entrances have. On Saturday alone, 65 people were turned away from 28 vehicles and asked to return, the police in Rostock said. In the district of Vorpommern-Greifswald, the Neubrandenburg police headquarters set up checkpoints on the access roads to the island of Usedom, in Wolgast and Ueckermünde and in Pasewalk.

The  police announced that they would also check compliance with the corona rules on Sunday. New ifo study on home office: potential not yet exhausted

Plans for easing: This is what the lockdown exit could look like

Drosten disagrees with the Astrazeneca vaccination

Defender of IS Germany boss appeals

Munich: rape with wolf mask – man is said to have selected girls specifically

Murder in Turkey: man is said to have pushed wife von...

Is she turning away from German hits?

What the pause of the “lateral thinking” initiator Ballweg means

Leader wanted! These three guys would help Hertha right away...

First Dates Hotel: Siblings are looking for love – one night...

These are the new corona rules until February 14th