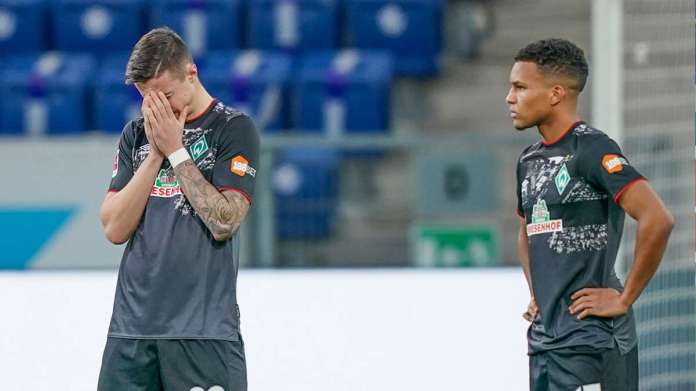 0: 4 clap on the 22nd Bundesliga matchday

Sinsheim – Florian Kohfeldt was well served. “That was nothing in the collective. We conceded goals that were far too easy, we weren’t determined, ”said the head coach of SV Werder Bremen after the 4-0 clap at TSG 1899 Hoffenheim.  The  players in the individual review with grades.

Jiri Pavlenka: Bitter evening for the keeper, because his colleagues let him down. Powerless for all goals conceded. Note 3,5

The odor Gebre Selassie: When he barely prevented the 0: 4 in the 64th minute, his collar burst, the captain hissed at his colleagues. Much too late, but the Czech had too much to struggle with himself on the right. Note 4

Milos Veljkovic (bis 46.): Defended very aggressively and, above all, offensively, which was sometimes quite risky and didn’t always work. Before the 0: 2 with an unfortunate lost duel. Remained battered in the cabin. Note 4

Ömer Toprak: Started sovereign as always, but then: At 0: 1 he picked up the offside, at 0: 2 he could have intervened better and at 0: 3 he just let Dabbur do it. Perhaps the early yellow card (8th) for a handball had thrown him off his feet. Note 5,5

Werder Bremen in scores against 1899 Hoffenheim: Marco Friedl completely beside himself

Marco Friedl: After the good performance, it seemed almost arrogant in the end – and that should take vengeance. Didn’t look good at 0-1 and 0-2.

The  0: 3 was then completely on his cap – with a sloppy pass to the top and incomprehensible passivity against template provider Bebou. Just like the 0: 4. Possibly the ankle injury from the Freiburg game bothered him more. Note 6

Felix Aug: Should replace the injured Augustinsson on the left side but failed. Back and forth with problems against robust Hoffenheim. He always put himself in the limelight, but did not bring these actions to a good end due to poor acceptance of the ball, hesitation or a lack of assertiveness. Note 4,5

Kevin Möhwald (until 56): As a six, trying to keep the game in order – also quite loudly with clear announcements to colleagues. But they died away, and at some point Möhwald couldn’t even be heard anymore. Note 4,5

Maximilian Eggestein: Very much in action, wanted to drive and direct the game, which he rarely succeeded in doing. Before the 0: 2 he should have put passer Samassekou under more pressure, at 0: 4 he did not attack Rutter. Note 5

Leonardo Bittencourt (until 56): Was allowed to play for Romano Schmid, but didn’t take his chance. Was only noticed by losing the ball and weak standards. Note 5

Josh Sargent (bis 82.): As always in the end: very hard, but almost worthless for the offensive. Note 5

Werder Bremen scores against TSG Hoffenheim: Milot Rashica does not get going

The  striker just doesn’t get going and certainly can’t get past the opponent. Hung more and more. Note 5,5

Romano Schmid (ab 46.): Could hardly assert himself in midfield and not even begin to provide scoring opportunities. Note 5

Yuya Osako (ab 56.): With a few small exceptions, the Japanese adapted to the weak game of his colleagues. Note 4,5

Niclas Füllkrug (from 56th): Comeback after an ankle injury – and almost another goal scorer. Just stopped shortly before the end, but otherwise little to see. Note 4,5

Manuel Mbom (ab 69.): Should ensure in midfield that Werder did not go under. Note –

Also interesting: “A cruel day” – the votes for the 0: 4 package of SV Werder Bremen against 1899 Hoffenheim.

The  Werder line-up against Hoffenheim: Felix Agu in the starting line-up – Romano Schmid on the bench!

Continue to the previous message:

The  defense is this season’s showpiece SV Werder Bremen, but it is precisely this part of the team that is causing some concern before the Bundesliga game on Sunday at TSG 1899 Hoffenheim. This is the starting line-up of coach Florian Kohfeldt!

The traffic of the future: which drive is the best?

Air purifiers and televisions: These are the highlights of the CES...

To the dentist in Tenerife or Marrakech – travel loophole