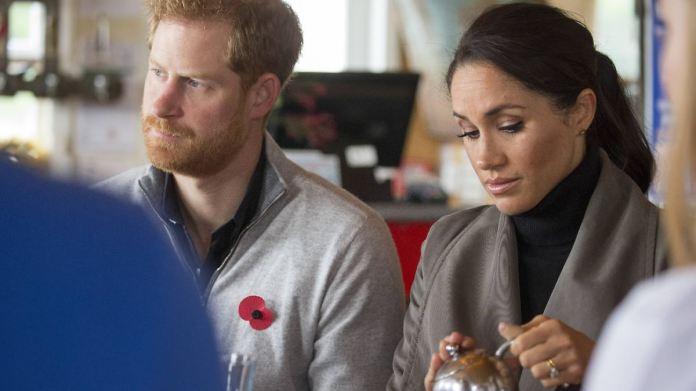 What about the line of succession?
Harry and Meghan are giving up these offices

With the abandonment of all royal duties, Harry and Meghan also lose some honorary military positions and royal patronage. For them, other members of the British royal family are already in the starting blocks. But the succession has not been clarified everywhere.
Prince Harry and his wife Meghan rule out a return to the front row of the British royal family:  The  couple declared their final withdrawal from royal obligations to Queen Elizabeth II, thereby losing their last royal titles and honorary offices. This was announced on Friday by Buckingham Palace in London, which was “sad” about the decision. Harry and Meghan would remain “very beloved members of the family”, however.

The  Duke and Duchess of Sussex have confirmed to Her Majesty the Queen that they will no longer be active members of the royal family,” the statement said. Her military honors and royal patronage “will therefore go back to Her Majesty”.

The se would be redistributed among the active members of the family.

With the drastic step, 36-year-old Harry loses his military honorary degrees, to which he was very attached. Among other things, he is no longer Honorary Commander of the Air Force and Honorary Commander in Chief of the Royal Navy. He is also no longer allowed to hold the title of Royal Marines, to which he was closely associated after serving in Afghanistan. Harry’s aunt Princess Anne, who is already associated with 65 military organizations, among others, takes on his role with the Royal Marines as the first female captain general.

In addition, Harry must give up his representative role for the rugby association. With the final resignation, he and his wife are no longer President and Vice President of “

The ater” and the “Association of Commonwealth Universities”.

Hope of the fans disappointed

Some of the patrons could not be filled because there are not enough royals to take over after Brexit, reports the Daily Mail, citing experts. For example, there are few options for Harry’s patronage over the Rugby Football Union and the Rugby Football League. Because Harry’s brother, Prince William, is already the patron of the Welsh Rugby Union, while the 70-year-old Princess Anne has the same role for the Scottish organization.

The  Duke couple of Sussex, on the other hand, remain closely connected with the children’s aid organization “Wellchild” and the “

The  Invictus Foundation” founded by Harry for the benefit of soldiers and veterans.

Until recently, many fans of the British royal family had hoped that the “Megxit” could only be a temporary event. But after the statement from Buckingham Palace on Friday noon, it is finally clear: Harry and Meghan will forever resign from their royal duties – with all the consequences. This has now also been confirmed by a spokesman for the two in a short message, as reported by the British broadcaster BBC.

The y only have one title

After talks with Harry, the Queen confirmed that after withdrawing from the royal family it was not possible to continue “the responsibilities and duties associated with a life in the service of the people,” according to the official statement.

Harry and Meghan broke away from the royal family at the beginning of last year and announced that they wanted to live financially independently. Today, the two of them live in California with their one-year-old son Archie, produce series and podcasts, get involved a lot and are expecting another child. A major interview with US presenter Oprah Winfrey is due to be published soon.

Meanwhile, one title has been retained for the two: Harry and Meghan can still call themselves Duke and Duchess of Sussex.

“Ecodumping” instead of recycling: when plastic waste moves around the globe

Bayer Leverkusen before the top game against FC Bayern: The most...

Nursing homes: almost half of the residents vaccinated twice

Royals: After “The Crown” – Camilla is attacked by Diana fans