(Motorsport-Total.com) – It was only digital pictures and not real photos that AlphaTauri published when presenting its Formula 1 car AT02. But what has changed compared to the AT01 from the previous year is easy to see – at least in some parts of the vehicle.

The  team makes no secret of the fact that something has happened at the front of the car. AlphaTauri used its development tokens to build a new nose and a new front suspension. This means that the entire front section should fit even better into the overall concept of the vehicle and become more stable.

Some steering components have also been modified. Here, parts are used that AlphaTauri obtains from Red Bull Technology within the framework permitted by the regulations.

The  first pictures of the AT02 give little information about this.

The  differences between the new and the old car are so small that one might believe that AlphaTauri simply gave the previous year’s vehicle a new color design. But that’s not how it is, as can be seen in detail. 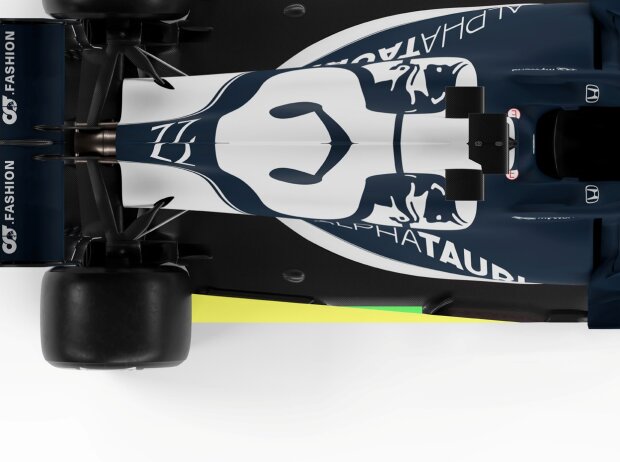 From a bird’s eye view: What will be missing from the sub-floor in 2021 is marked in yellow Zoom

The  modified underbody, for example, is particularly noticeable this year. According to the regulations, this must taper in front of the rear wheels.

The  new rules, however, leave the teams – with all the restrictions – enough leeway for individual solutions, as implemented by AlphaTauri.

About 20 centimeters behind the point where the sub-floor tapers, the team made an incision in the floor slab. New air deflectors are also used at this point. This can be understood as an attempt to regain some of the downforce lost through the changes.

How much AlphaTauri is concerned with optimizing the airflow in front of the rear wheels can also be seen in the further course of the underbody, which has another bead just in front of the wheels. All of these modifications are intended to help smooth the airflow towards the diffuser so that downforce can be generated as efficiently as possible at the rear of the vehicle. 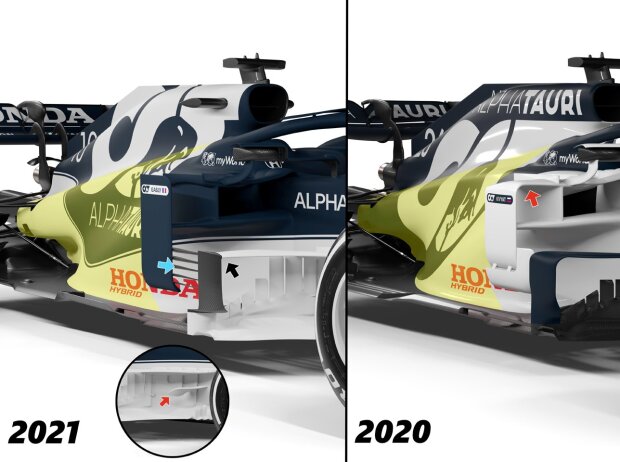 Direct comparison of Formula 1 cars: AlphaTauri AT02 (left) and AT01 (right) Zoom

Further changes compared to the 2020 car can be seen on the shoulders of the side pods. AlphaTauri relies on a slat solution (blue arrow) on the side, as it was already seen in the past with competing teams.

In addition, the front vertical strut (black arrow) has been moved further forward and now has an angular connection to the boomerang element above the side wind deflectors.

Another new feature is the separation of the large side air baffle from the top of the side box (red arrow). In 2020 the structures were still connected at this point.

The  modifications to this area of ​​the vehicle have an impact on how the air turbulence that occurs on the front wheels hits the aerodynamically sensitive areas at the rear of the vehicle. At the same time, it can improve the flow to the rear wheels. 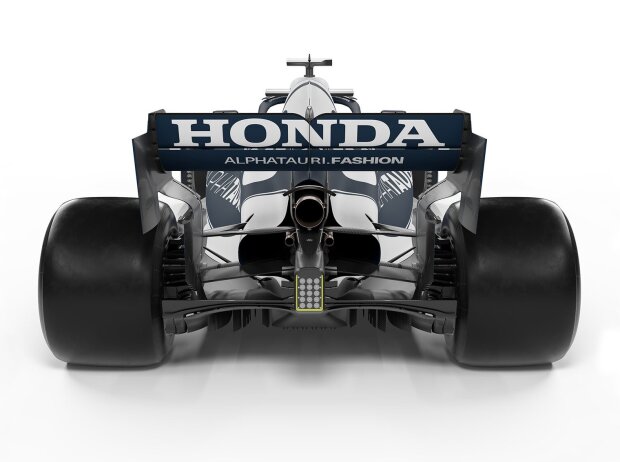 In the rear of the AlphaTauri AT02, a hybrid turbo drive from Honda works again Zoom

The  yellow highlighted area on the side box shows how closely AlphaTauri and drive partner Honda have worked together to optimize the vehicle’s cooling. This should also have improved the overall aerodynamics, especially since the bonnet now seems to be much tighter around the built-in components. Overall, the coverage looks narrower than it was in 2020.

The  interesting thing is that although AlphaTauri could have updated the rear suspension and the transmission without the use of development tokens, the team decided not to do so. 2020 parts are used again, as the rear view shows. Practical side effect: AlphaTauri was able to rely on experience from the previous year when designing the cooling openings in the rear.

The  diffuser also has the status of the 2020 season, although the vertical struts have been reduced to a length of 50 millimeters, as stipulated in this year’s regulations. 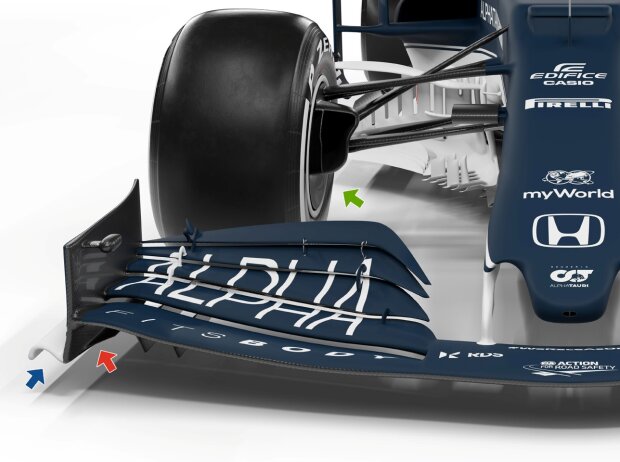 The  front wing on the AT02, as shown when the car was presented Zoom

A new front wing can be seen at the very front of the car. Below the main profile, AlphaTauri has installed another strut (red arrow) and redesigned the bottom plate of the side end plate (blue arrow).

The  shape of the flaps above the front wing has also changed. However, this is probably not the final specification for racing.

The  same applies to the brake cooling on the front axle (green arrow), which can be seen in our picture in a kind of “raw form”.

The  usual small air deflectors that the teams use to modify this area of ​​the wheel suspension are missing. Here, too, it is expected that the first changes will be implemented during the test drives.

Union Berlin: Extension and loan to Klagenfurt for goalkeeper Moser

Danish corona rules: Hundreds of cross-border commuters have to queue |...