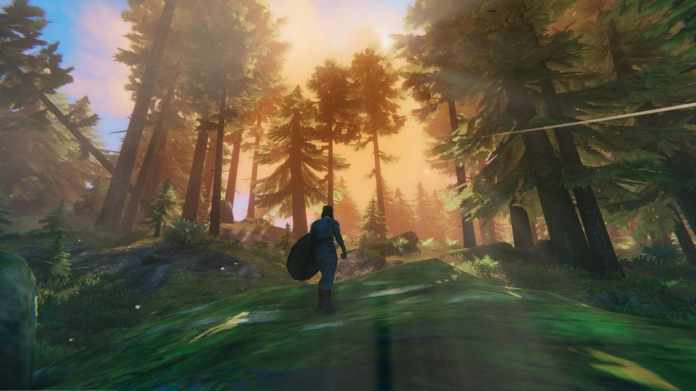 It seems to be one of “those” stories again: A tiny 5-man indie development team is working on an online survival game and breaks all sound barriers within a few weeks.

With now well over 3 million copies sold and around 500,000 simultaneously active players every day (and thus number 3 on the Steam charts), we should first of all congratulate them. And then ask conscientiously: How long will the hype last? And what does the future promise?

Anyone who still bets on online survival games at the beginning of 2021 either has too much money or is simply insane:

The  market for this genre is extremely overcrowded, the attention span of the users is low, the top dogs are closely fenced off from one another: “ARK” and “Rust” already unite thousands of players behind them, right behind them are titles like “

The  Long Dark” in a line to the horizon. New challengers like “Grounded”, “Sea of ​​Thieves” and “Raft” are still quite fresh on the market.

>> Steam Sales 2021: Dates, Tips and Recommendations << As you can see, the list of “online survival games” is endless, and the ingredients are at least similar. Sometimes you beat up zombies, sometimes dinosaurs, sometimes wild bears. Sometimes you are eaten by the shark, sometimes brought around the corner by other players.

The  worlds are big, the local conditions are life-threatening, the play elements are carefully designed for building and improving. One might think: at some point the end of the flagpole will be reached. Unless you’re a Viking.

I’m just romping with trolls in the forest

On paper, “Valheim” doesn’t do that much differently at first, and it also looks astonishingly unspectacular: simple to downright ugly textures and deeply unspectacular, pixelated character models show a game that technically seems to have fallen out of time.

After all: light, fog and various weather effects give the simple graphic dress a tremendous atmosphere, giving it depth and charm. Nice side effect of the technical minimalism: Where more and more games exceed 20 to 100 gigabytes, Valheim is a real dwarf with one (!) Gigabyte installation size on your hard drive – and also runs without problems on older computers (in the early access framework).

The  virtual world itself is generated randomly, as in Minecraft, and in the current Early Access version already offers a pleasant range of different biomes: sails over meter-high waves in the ocean lashed by storms, explores open grasslands and gloomy forests, climbs on snow-covered mountain peaks and venture into dark dungeons. Many scattered background stories, for example on rune tablets, prove that the developers do not just design their world according to scheme F. In fact, “Valheim” surprisingly offers far more narrative depth than many comparable titles.

The re are no classes in Valheim, the skills of your Viking walk on Skyrim’s “Learning by Doing” paths: the more you do something, the better you get. After all, you can already “do” quite a bit in Early Access: lots of resources want to be collected, your own small Viking settlement founded, nasty creatures like trolls and skeletons beaten up and (currently) seven big bosses rendered harmless – after all, you want to be with Gods Father Gaining respect for Odin. All of this is already working very well, although the physical gadgets are particularly impressive: When an angry troll clears the forest behind you, the inner adrenaline pump jumps at full steam.

>> Result of Corona: Steam game platform with record number of simultaneous users << Valheim is designed for co-op - a total of 10 players can let off steam at the same time - but already now offers the possibility of PvP: Those who like to duel with other players can do so according to their own taste. Or the other way around: If you don't feel like fighting other players, you will be completely spared. Unless someone comes up with the smart idea of ​​chasing two trolls into your camp. With so much creativity, even gamers who are averse to PvP have to take off their hats.

Publisher Coffee Stain once again has a golden hand

The  one especially designed for the cult “Goat Simulator“Well-known game developer from Sweden now also acts as a publisher – and has recently shown that he has a golden hand again and again. In 2020 the Swedes took care of the distribution of the terrific pixel shooter “Huntdown“(Often confused with” Hunt: Showdown “), in 2019 the construction sim”Satisfactory“, 2018 about the co-op” Dwarves in Space “game, which has been celebrated to this day”Deep Rock Galactic“- for many players one of the strongest and funniest 4-player titles in recent years.

Even CEO Albert Säfström was surprised that they have already hit the bull’s eye again: “THREE MILLIONS? Now already? ”- For him, this success is still completely new territory for Coffee Stain, at the same time one is grateful to Daniel Kaplan, who recently participated in the success of Minecraft, to have a capable man on board – as well as the developers of Iron Gate.

To put the numbers in context: the game has sold over three million units (Valheim costs 16.79 euros in this country) within 16 days of the start of Steam Early Access. And with almost 500,000 players a day, you even exceed the record numbers of the triple A competition such as Monster Hunter: World and GTA V.

The  Steam User Reviews are always a useful guide to how well a game is received within the community. At the time of this writing, Valheim has 77,500 “extremely positive” votes.

The  fact that popular streamers like Gronkh and Co. quickly rush to such a game accelerates the process in addition to the Internet whispering that is already echoing everywhere: On Twitch, Gronkh presented the game together with Kaya Yanar in an extremely funny and charming stream.

The re are also more and more popular faces on YouTube who jump on the Valheim train to Valhalla.

Due to the planned size of the project, the Iron Gate developers are currently assuming that the Early Access phase will last longer than a year. “We want to do the game as well as we can. We learned in the beta that working with the community is the best way to do this. Valheim is a huge world and we still have a lot to add: With the Early Access version we can constantly collect valuable feedback and work with our players on what they still want to see from us. ”Communication with Iron Gate is ongoing primarily about their own Discord-Server, as well as the Steam forums.

Despite the immense success of the first few days, the developers are not deviating too far from their plans:

The  road map for the coming weeks is already in place, the only thing that gives the creators a boost is the possibility of engaging even more manpower for the project.

The  planning includes, among other things, new biomes, further improvements to the combat mechanics, moon phases and a real sandbox mode.

“We always assumed the Early Access Launch would be reasonably successful, so I think our plans haven’t changed much. Except that we might be able to afford a bigger office now, ”says Richard Svensson. He is the one Valheim started with as a one-man project in 2018. Coffee Stain came on board as a publisher in 2019, and Iron Gate only grew to five people in 2020.

Svensson is already enthusiastic about the community behind “Valheim”: “It’s just fantastic when the fans deliver pictures, music and other art inspired by Valheim. I like to inspire people. ”

All information about Valheim at a glance

Link to the Steam page

The economy in focus: why the euro continues to soar |...

Economic Policy – Stuttgart – Minister for Higher Down Payments for...

How often did Daniele Negroni and Melody really have sex?