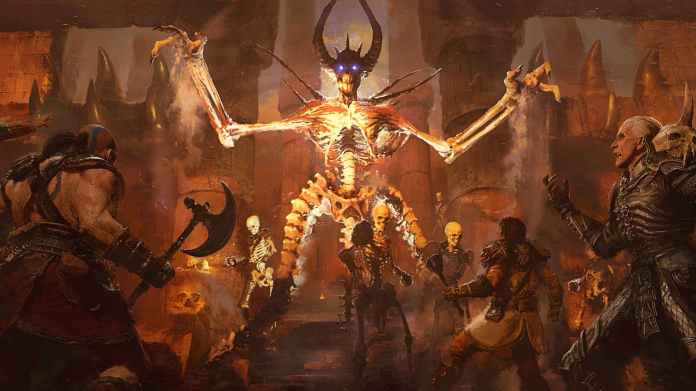 To this day, Blizzard is considered one of the most important game studios in the world. And that although the innovative strength has long been lost, as the Blizzconline confirmed once again this weekend.

Anyone who spent their free time playing video games at the turn of the millennium could hardly avoid Blizzard.

The  universes of Warcraft, Starcraft and Diablo had cast a spell over the players back then. It was the heyday of Blizzard, today’s loyal fans might say. And with the release of “World of Warcraft” in 2004, Blizzard had finally reached the Olympus of game studios.

The  company founded by Allen Adham, Michael Morhaime and Frank Pearce knew how to keep pace with the times. And with “World of Warcraft” Blizzard had even created a game for which players were willing to pay a subscription fee. This payment model works with very few video games. “World of Warcraft” paved the way for Blizzard to billions in sales and exploding share prices.

In the years that followed, Blizzard understood how to ideally advance their prestige game. Expansions for “World of Warcraft” were celebrated by the community. Those who were less able to start with the online role-playing game were later served with the sequels of “Starcraft 2” and “Diablo 3”. Everyone was happy. Blizzard has perfectly cemented the image of the infallible game studio and put the finishing touches to their marvel with the trading card game “Hearthstone” and the tactical shooter “Overwatch” until 2016.

But then the whole facade gradually began to crumble. One waits in vain for major sequels or even completely new worlds and formats. Instead, cold coffee has been served time and again for the past five years.

Yes, partly it was also the wishes of the players that after 15 years you could travel back in time to experience “World of Warcraft” all over again. With other remaster versions like that of “Warcraft 3” Blizzard has clearly shot itself in the leg.

The  game was implemented so carelessly and had so many technical defects that it was downgraded to the worst game of all time on Metacritic.

At the same time, the gaming giant made no mistake about getting into negative headlines again and again. For example, in 2019 when an e-athlete who sided with the Hong Kong protest movement was withdrawn from circulation.

The  later excuses for the China-friendly action only seemed artificial.

But despite all this development, there is still the faint hope that Blizzard could someday find its old glory again. For example, last weekend, on which the in-house exhibition Blizzconline was held.

But those who looked forward to innovative projects were disappointed once more.

The  business with nostalgia simply seems too attractive.

The  biggest announcements were that there will be a new edition of “Diablo 2” and that classic versions of the “World of Warcraft” expansion “Burning Crusade” and “Hearthstone” are planned. And as if all of this wasn’t enough microwave food, there is also an arcade collection for which you can shell out up to 59 euros.

The  only bright spot remains so only «Diablo 4». After all, there was a new class trailer for the villain here.

The  game will be released in the distant future. Hopefully the people at Blizzard will have found their inventor hats again by then.

Interest in Jayden Braaf – Will Dortmund get the next top...

Leading article on the MCH Group – That’s it for Messe...

Cyberpunk 2077, Doom Eternal and Among Us are among the top...

The medial dissection of the woman

DFB: Fritz Keller and Friedrich Curtius give each other “one last...

Marcus Thuram speaks up after the spit attack against Posch –...

Due to the ongoing exceptional demand due to Covid-19, Tecan is...