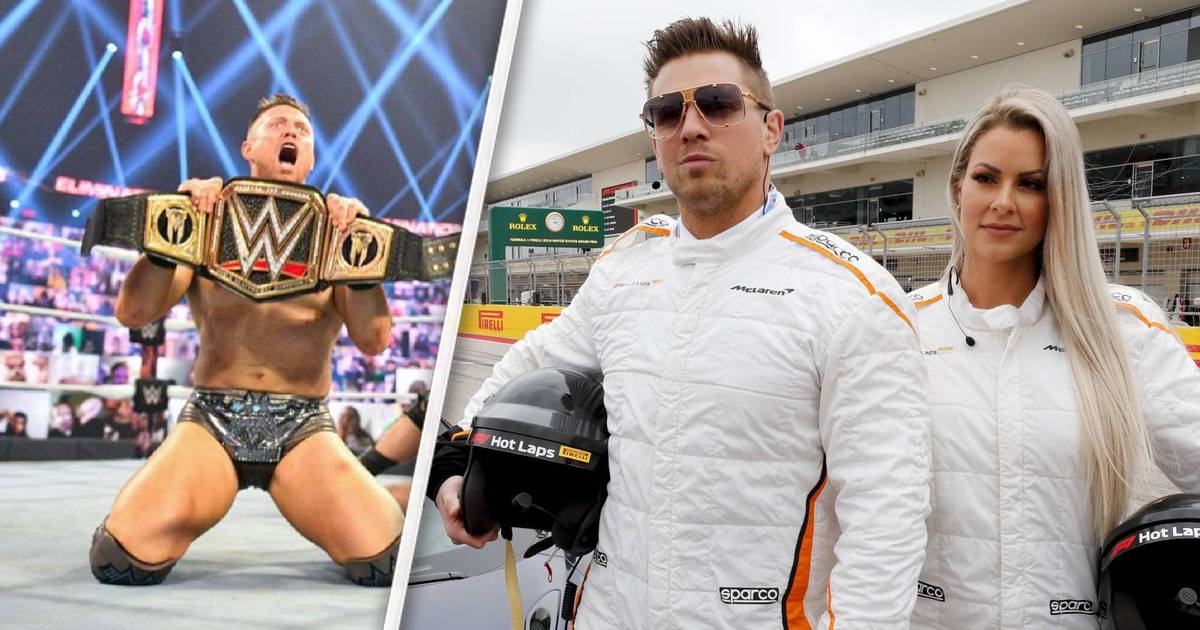 The  champion survives an exhausting match.

The  money-in-the-bank winner pounces on him like a vulture and takes the title from him cheaply.

In itself, this is a scenario that WWE has pulled through numerous times since the premiere with Edge and John Cena in 2006 and therefore no longer has the shock effect it had back then.

The  Miz had Drew McIntyre duped in this way at the major event No Escape (Elimination Chamber) – after a previous attack by Muscle Mountain Bobby Lashley.

The  40-year-old Miz – who has had a winding career at WWE – was actually seen as the MITB winner as a stopgap solution that would presumably mess up the “cash-in”. For too long the man, whose first and so far only title reign was ten years ago and was a flop, was written off as not suitable for a main event.

And the question of whether rightly or wrongly preoccupies WWE fans after the unexpected title coup in the run-up to the mega show WrestleMania 37 now even more.

The  Real World” on MTV

Mike Gregory Mizanin, as Miz is actually called, has an ambiguous reputation in the scene: On the one hand, he enjoys a lot of recognition for how he got his way through the tough industry with his special background as a skeptical reality TV star. On the other hand, his skills in the ring are considered not beyond doubt – which stood in the way of an even bigger career.

Mizanin applied for the casting show Tough Enough at WWE in 2004 after he had already achieved a certain level of notoriety in the USA: He was a participant in MTV’s MTV reality series “

The  Real World” and already had his there Miz character presented – as an arrogant and hot-headed counterpart to his, in fact, very calm and friendly nature.

With basic training at the California league UPW – from which the superstar and later rival Cena emerged – the college graduate from Ohio worked since 2003 to bring his character to life as a wrestling star.

WWE saw the potential and signed Miz, even though he wasn’t allowed to win the Tough Enough Show (the long-forgotten Daniel Puder won). When Miz served at WWE, however, he was unfinished in every respect – and his industry switch backfired for the time being.

Chris Benoit kicked Miz out of the WWE locker room

The  first matches – the opponent at the debut was in 2006 the nineties legend Tatanka – and the first appearances on the WWE microphone received devastating reviews from fans, and through missteps behind the scenes he also angered colleagues:

The  anecdote that ex-champion Chris Benoit became famous kicked him out of the locker room for bad behavior.

Before he caused the most disturbing tragedy in WWE history with the murder of his wife and child in 2007, Benoit was a cabin leader of the league (Roman Reigns in SPORT1-Interview: Those are the unwritten laws in the WWE locker room).

According to longtime WWE commentator Jim Ross, the cause of the uproar was that Miz had crumbled a referee’s pocket while eating a chicken snack.

Miz was in such a bad position that at that point many other talents would have thrown out. Miz’s passion for wrestling, however, was so great that after all a lot of hard work he earned the respect of his colleagues and fans.

At the side of John Morrison, who also joined WWE via Tough Enough (his partner again since his comeback in 2020), he achieved his first successes as a tag team wrestler from 2007.

The  stronger and more spectacular fighting in the ring and the rhetorically stronger Miz complemented each other in their strengths and compensated for the weaknesses of each other.

It was then Miz who perfected his role as a pain in the ass that drove the fans to white heat so much that he convinced WWE to build him up for bigger tasks and to shape him as a challenger for the then top star Cena.

Drowned between John Cena and

With the first Money-in-the-Bank win in 2010 and the successful cash-in against Randy Orton, WWE completed the plan. Along with sidekick Alex Riley (who was considered a promising talent at the time before he made John Cena a real enemy), Miz had risen to become the top villain.

The  Rock” Johnson, who was returning from Hollywood.

Miz finally lost the title to Cena and was then again kept away from the main event: Ultimately, he did not convince sufficiently at the level, especially in the ring could not exceed a certain level.

The  eternal opponent Daniel Bryan – who once appeared as Miz’s involuntary protégé at WWE, although he was always much stronger in wrestling – once brought the problem to the point in a much-discussed verbal exchange on the unscripted talk show “Talking Smack”: He held Miz suggests fighting “like a coward”, risking too little in the ring. A tough diagnosis, which, from the point of view of critics, has a real core: Miz has a certain manual dexterity to go between the ropes as hard as Bryan and other complete packages.

At a slightly lower level, Miz also had a decent career after falling from the top: As a reliable midcard villain, he was always good for Intercontinental, US and tag team title reigns and for entertaining moments.

Among other things, his reinvention as “A-Lister” was remembered as a highlight, in which he staged himself as a Hollywood megastar because of his appearances in the B film series “

The  Marine” – with Damien Sandow (“Mizdow”) as a stunt double that wonderfully senselessly imitated all its movements.

Not only because of his film and series trips (he had a guest role in “Supernatural” in 2016) Miz leads a fulfilled life away from the ring: With his wife, ex-playmate and diva champion Maryse Ouellet, whom he met and fell in love with at WWE , he has two children and his own reality show called Miz and Mrs.

Together with Maryse there was also a new edition of the feud with arch rival Cena in 2017. A mixed match against Cena and his then partner Nikki Bella prepared Cena’s marriage proposal for Bella (which was then followed by the separation).

The  Miz at WrestleMania 37: Bad Bunny instead of title match?

Miz’s re-emergence as champion comes unexpectedly and seems to have been born out of necessity: Heavyweight Otis, the actual 2020 Money-in-the-Bank winner, has proven to be a failure that the WWE superiors do not see as ripe for something higher – he was last given wrestling tutoring and has been demoted back to the tag team area with Chad Gable.

The  fact that Miz was allowed to replace McIntyre after Otis also seems to be more of a transitional scenario:

The  way the staging smells more like Miz becoming the stirrup holder of a McIntyre-Lashley feud before or at WrestleMania – while Miz is in favor rather suggests a WrestleMania story with rapper Bad Bunny and / or newcomer Damien Priest, with whom he got into the enclosure once again at No Escape.

Is Miz’s second title reign a nonsense surprise for the sake of the surprise that devalues ​​the title? Or a earned career bonus? Or both in one?

The  discussion-loving WWE fan base has another issue.

THW Kiel after handball drama in the Champions League final |...

Wedding at first sight: Wiebke on the verge of collapse