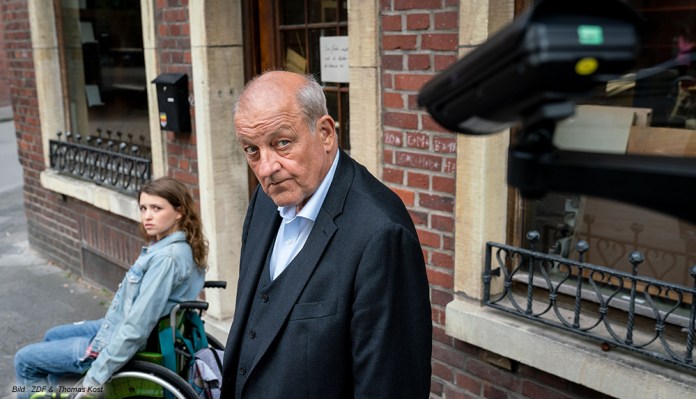 “Wilsberg” gets it in “Monitoring and Rewarding” with the Big Brother To do: Today, Saturday, it’s about surveillance and a social credit system – not in China, but in Westphalia.

Brave new surveillance world: If you want to make a difference in today’s anniversary episode (26 years since episode 1 on TV) of the popular “Wilsberg” crime series on ZDF, you should be nice to your neighbors, put the garbage on the street and be on time pay the rent. Since the new app for collecting social points has been available in Münster, doing good has been rewarded, misdeeds mean point deductions. Ironically, in the Westphalian idyll and home of the book-loving detective (Leonard Lansink), the fantasy of total digital control threatens to become reality.

Based on the Chinese model, the “Social Credit” group has introduced a sophisticated point system for social optimization: Similar to collecting digital discounts at the supermarket checkout, each participating citizen can polish up their social account balance. With the help of the cameras that record everything and everyone in the city, plus points are awarded for friendliness, helpfulness and compliance with the rules. Those who score a lot can hope for all kinds of advantages: coveted concert tickets, preferential treatment when looking for an apartment or the next step in their career.

It is hardly surprising that private investigator Wilsberg – who loves books, is stubborn, not very tech-savvy and skeptical at work – does not take part. “My good deeds are my private business,” he says out of conviction. “A private matter – that is also a word from the day before yesterday,” countered his niece Alex (Ina Paule Klink), who not only joined the social points group as a user of the new app, but also works for him as a lawyer. “Everyone can decide for themselves whether they want advantages,” she emphasizes the only seemingly voluntary approach of the app.

The  perfidious logic of the comprehensive social scoring system soon became apparent: Those who withdraw, fall out of the world, can no longer participate in social life. It hits even worse those who want to put the company down. At least the grieving friend (Susanne Bormann) of the deceased Richard is convinced of that. Someone wanted to make it look as if the head of development at “Social Credit” had been the victim of a hit-and-run accident. In fact, he had collected incriminating material against his company and worked with a citizens’ initiative against the big data project.

Wilsberg not only has to prove a murder, but also goes on a search for the explosive documents. How good that he can count on his friends – even if they threaten to fall into disrepute in the world of total digital control through their acquaintance with the odd investigator.

“Monitoring and Rewarding” – Big topics for the anniversary

Big data, corruption and control: with the new episode “Monitor and reward”, the Wilsberg makers (book: David Ungureit; director: Dominic Müller) tackle the big issues – and thus take on themselves in the context of the entertainment thriller.

The  dystopian plot and the one-dimensional characters on both the good and the bad side are so exaggerated and pointed that the horror vision of digital surveillance seems far more absurd than it really is. After all: Police idiot Overbeck (Roland Jankowsky) shines as a really comical mixture of walking philosophy encyclopedia and Inspector Clueso.

“Wilsberg: Monitoring and rewarding” is running this Saturday (February 20) at 8:15 p.m. on ZDF.

Emotional message from Lucas Braathen to his fans

Innovation instead of cheating: Ferrari is apparently planning the engine revolution