In December, Saxony, as the Corona hotspot at the time, first pulled the emergency brake and closed schools and daycare centers.  The  other countries followed a few days later. After two very long winter months, not only is the land slowly thawing again, a bit of life is also returning to the facilities.

But the hopes that things will gradually go back towards normality in everyday school and daycare are already clouding over because the corona numbers are deteriorating.

In many daycare centers, there wasn’t really a lockdown

A total of ten federal states are opening their daycare centers and primary schools a little further this Monday. Saxony opened a week ago. Lower Saxony has been teaching primary school children back to school since January.

Many facilities have never really been closed in the past few weeks. In the federal states there were different regulations (read here what applies in Berlin): Either everything is closed, with an offer for emergency care or generally open, but with an appeal to the parents not to bring the children.

This meant that in some places, at least in daycare centers, there was not really a lockdown, and the emergency care of the primary schools was also used well in some areas. Graduating classes were also allowed to be taught in schools.

The  federal and state governments had agreed an exception rule for them because of the preparation for the exam. This still applies.

Most of the question marks now remain for the years above elementary school and below the final grades. It is an open question when they will see their schools from the inside again. Since the corona numbers are now rising again – which experts attribute to new, faster-spreading virus variants – further opening steps are initially less likely.

This time the word “patchwork” really fits. Because this is exactly what the brightly colored corona card from the Robert Koch Institute currently looks like.

The re are extremely low levels of infection in some counties, but very high in others. Even within the federal states, the differences are great.

Since the federal states have also linked daycare and school openings to regional contagion rates (incidences), the facilities in some districts and cities remain open or only in limited operation, even if a state has announced openings in principle.

The re is also a “patchwork quilt” with the incidence rules: In Bavaria, classroom teaching is possible up to a value of 100, in Mecklenburg-Western Pomerania up to 150, in Thuringia up to 200. How elementary school students are now taught in school is also regulated differently.

Either there is so-called alternating operation with half classes that come to school alternately, or full operation with fixed groups that should not meet if possible.

Distance is hardly possible at primary schools and daycare centers.

The refore, if there are already openings, the employees should get the vaccination earlier, according to Schleswig-Holstein’s Education Minister Karin Prien (CDU) perhaps in March.

The  whole thing seems undisputed and, according to reports, is as good as decided, but it’s not as easy as it sounds either.

Teachers and daycare staff could be vaccinated earlier

The  moment you prioritize a group higher, that means that another group is slipping further back,” says Family Minister Franziska Giffey (SPD). Nevertheless, she speaks out in favor of it. “Because we have simply seen the importance of childcare for many other areas in Germany, for the functioning of our overall system.”

The  German Foundation for Patient Protection warns against the fact that the very old and the seriously ill could then fall behind. “If professional groups are to be put even further forward, it will cost life,” said Foundation Board Member Eugen Brysch of the dpa. According to the Federal Statistical Office, there are a total of just under one million primary school teachers and daycare workers in Germany.

With masks and tests against the mutants

After the last summer vacation it was a big upset: masks in school, even in class. Now it’s more about the question of which mask. In many schools, elementary school students now also have to wear OP or FFP2 masks, for example in the most populous state of North Rhine-Westphalia.

The  General Secretary of the Federal Schoolchildren’s Conference, Dario Schramm, is in favor of such a duty: “We experience this every day in everyday life, why not in schools?” He told the newspapers of the Funke media group.

Great hopes are placed in the increased use of rapid tests. It’s best to test daycare and primary school staff, including assistants or cooks, twice a week, says Family Minister Giffey. She sees this as a “bridge” until everyone in the facilities who want it is vaccinated. Mathematically, that would be around two million tests a week.

But that too is in the hands of the federal states. And they already have corresponding plans. In Berlin, for example, primary school teachers and kindergarten teachers should be able to voluntarily have themselves tested twice a week from Monday. Previously trained staff from schools and daycare centers should do that.

The re are similar regulations in other federal states. (dpa) 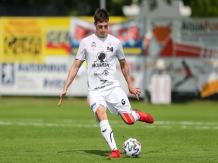 Dornbirn secured a point in Steyr – 2nd division in the...

Durstexpress employees in Leipzig want to fight to keep their jobs