The  now 61-year-old Christina Engelhardt says she had a relationship with the director for over eight years – with the knowledge of his long-term partner at the time, Mia Farrow (76), as the British Daily Mail writes.

Engelhardt first met Woody Allen, then 41, in a restaurant in New York. At the time he was about to release his film “Manhattan”. In it, he plays a middle-aged man who has a relationship with a 17-year-old high school student. Today Engelhardt says: “

He set the rules for the meetings.

The y never talked about his work and only met at his place. To do this, she regularly took a two-hour bus ride. «I never stayed the night once. It was only a couple of hours, including sex. A glass of wine, a little chat, a game of chess and some sex.

The  four hour-long episodes are all about Allen’s marriage to Soon-Yi Previn (50), the Korean-born adoptive daughter of his former partner Mia Farrow.

The  first episode was broadcast in the USA last Sunday.

Document on abuse allegations is full of “untruths”

The re are also allegations that Allen molested another Farrow adopted daughter, Dylan, when she was seven years old. Allen always denied these allegations.

After the first episode of the documentary was broadcast, Woody spoke to everyone himself. He and his wife Previn describe the work as “a bad slipping full of untruths”, as “

The  Hollywood Reporter” reports, citing a statement by the couple. It also says that the filmmakers Amy Ziering (59) and Kirby Dick (68) have “no interest in the truth”.

Christina Engelhardt did not realize that she was manipulated

He also accuses the documentary filmmakers of not only “working secretly with the Farrows for years”, but also that he and his wife “were approached less than two months ago” in order to respond. “Of course” they refused. And: “As has been known for decades, these allegations are false.”

The  allegations were then investigated. It was found that no abuse had taken place.

Christina Engelhardt says today about her relationship with Allen that she did not realize how she was being manipulated. She was young, ambitious and in love. She was flattered that Woody Allen was interested in her. “For me it was exciting to be seen not only because of my attractiveness. I thought he was just as interested in my mind as he was in my body. ” (paf)

Neu-Isenburg: Danger of traffic jams on the A3 between Frankfurter Kreuz...

Frankfurt Fashion Week is a ray of hope for many industries 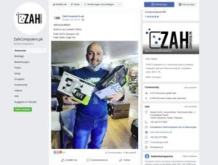