With the men’s slalom, the Alpine Ski World Championships, which are highly successful from an Austrian point of view, come to an end in Cortina. At the end, an ÖSV quartet can hope for a medal again.

The  first round (start at 10 a.m.) will be opened by combined vice world champion Alexis Pinturault. At the end of the top group, the ÖSV hopes Manuel Feller and Marco Schwarz start with starting numbers six and seven. Adrian Pertl, the slalom vice world champion of 2019, Michael Matt, starts with number ten.

The  start numbers 1 to 30 of the men’s World Championship slalom: 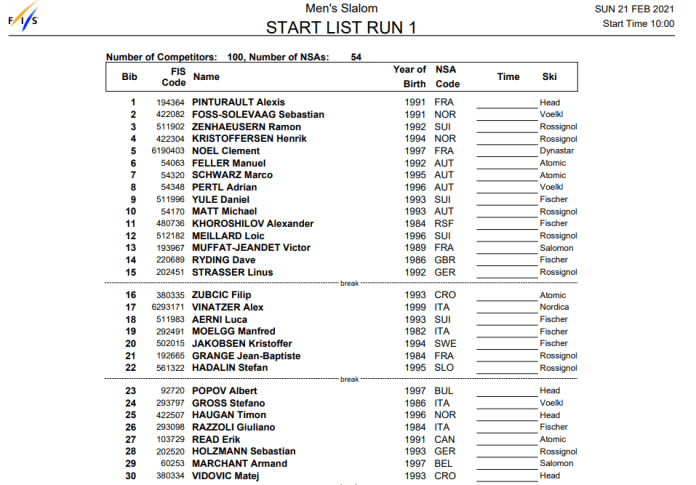 The  second round (from 1.30 p.m.) is affected by a short-term change. Instead of starting with the 30th of the first run, the top 15 start in a downed order.

The  other drivers are only allowed to compete after the half-time leader. This measure was taken due to the warm weather conditions in Cortina.

Top 15 instead of 30: World Cup slalom with a different start rule

A total of 100 runners are at the start in the first run and should demand a lot from the slope. Athletes from San Marino, Haiti and Timor-Leste also try their hand at the World Cup slope.

Double world champion Liensberger “with heart and enthusiasm” on skis

Corona: Karl Lauterbach fears 3rd wave – “would have to tighten”

Jungle camp: Dr. Bob with a declaration of love for...

Corona: Before the shutdown, the Germans storm the hairdressing salons

South Africa variant: an overview of the effectiveness of the vaccines

Biathlete Eberhard tenth at the World Cup in Hochfilzen

The sky highlights until the end of January