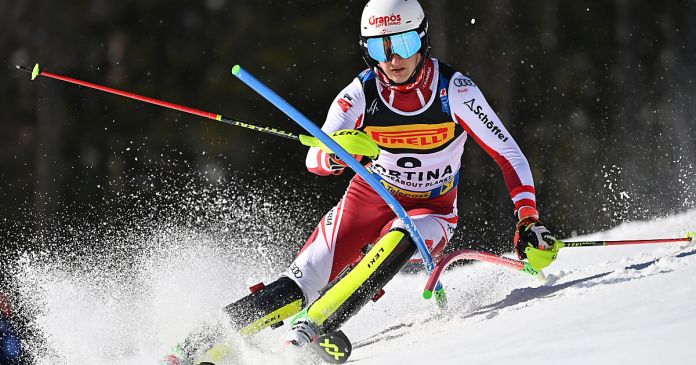 Adrian Pertl won silver in the slalom at the end of the 46th Alpine Skiing World Championships.

The  young Carinthian had led sensationally at the halfway point of the last World Cup competition, but after the third-best run time missed gold by 21 hundredths.

World Championship Slalom: Pertl leads after the first round

After the first run, Pertl, with starting number eight, had led sensationally and for the first time in his career in a slalom. Marco Schwarz was eighth, Michael Matt 13th and Manuel Feller after a material mistake only 24th. Because the rule of 30 had been overridden due to concerns about a slope softening under the sun, Matt was able to decide on the ÖSV course -Slalom boss Marko Pfeifer already start as third, Schwarz as eighth. Matt could not add anything, however, combined world champion black threaded after a strong interim and was eliminated.

14 of the 15 possible runners for top positions made the decision within a second. All attacked, four including Black were eliminated. Pertl had previously only achieved a podium place in the World Cup, a year ago he had finished third in Chamonix. In a Norwegian double lead by Foss-Solevaag in front of Kristoffersen, the young Carinthian entered the 63-goal race and kept his nerve. “For me, silver is like gold,” said the young man from Ebene-Reichenau.

For Austria it was the strong end to a highly successful World Cup. With 8 medals, 5 of which were gold, Cortina was one of the most successful alpine title fights ever.

Donald Trump does not give up – and announces another wave...

Highlight VIDEO: This is how Rapid gives away points in Altach...

Horror crimes in the USA – police find fried hands and...