The  world’s largest vaccine manufacturer has indicated that there could be delays in exports of corona vaccines.

The  head of India’s Serum Institute, Adar Poonawalla, wrote on Twitter that his institute had been instructed to “prioritize India’s great needs while balancing the needs of the rest of the world.”

The  company manufactures the AstraZeneca vaccine under the name Covishield at low prices.

India is often referred to as “the world’s pharmacy”; In the second most populous country, around half of all vaccines are manufactured worldwide. India had recently given away millions of doses of corona vaccine to poorer countries in its region and beyond. Others were sold. For India this is an opportunity to strengthen its image in the region – also in view of its neighbor China, which is militarily and economically superior to India.

But India itself needs a lot of vaccines and wants to vaccinate around 300 million people by the summer – a little less than a quarter of its 1.3 billion population. Until recently, the corona numbers in the huge country were relatively low. Only around 10,000 new infections were recorded every day, while at peak times last summer it was almost 100,000 a day. Some experts suggested some immunity in the population, and antibody tests suggested that many carried the virus asymptomatically. With the lower number of cases, however, people’s carelessness had also increased and more infectious corona mutants from Great Britain, Brazil and South Africa were recently found. Recently there has been an increase in the number of cases in some regions, including the metropolis of Mumbai.

Accessed on February 22nd, 2021 at 9:14 am on https://www.sn.at/panorama/international/weltgroesster-corona-impfstoffsteller-warnt-vor-verzoegerung-100140397 German lockdown is to be extended to March 14th – coronavirus...

Opel sales collapse by more than a third, and PSA sales... 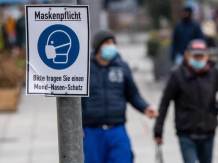 Deportation flight from Germany landed in Afghanistan – for the first...