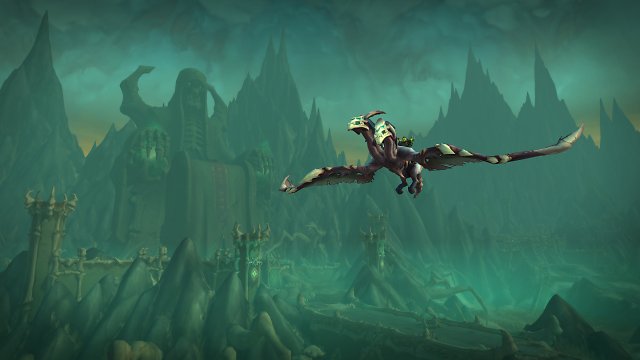 February 21, 2021 at 2:29 am
from Philipp Sattler –
As part of BlizzConline 2021, the developers have released tons of information about the upcoming Patch 9.1. This is called Chains of Rule and brings some new content for WoW Shadowlands with it. In addition, the patch enables us to finally swing our wings and fly through the Shadowlands – under certain conditions.

Actually, it wasn’t really news that players will be able to take to the air in WoW Shadowlands from the upcoming Patch 9.1 and finally fly through the Shadowlands. Nevertheless, this topic was taken up at BlizzConline 2021. Because there were still a few ambiguities. We already knew beforehand that this time around there was no need for a reputation and the ability to fly was linked to progress in making one’s own pact. This has now been confirmed again by the developers. You don’t have to reach a particular level of fame, just complete the pact campaign to the specified point. How long this will take exactly as soon as Patch 9.1 arrives on the live servers is still not clear. Because the pact campaign will presumably also be activated and promoted weekly in patch 9.1. But it won’t be that long before we can finally fly, said Game Director Ion Hazzikostas in several interviews.

In addition, the developers confirmed that the success associated with this applies to all accounts. So you don’t have to complete the pact campaign with every character to be allowed to fly. In addition, this has now also been confirmed, it will be the same as in BfA. If you have unlocked flying with a char, then your twinks can immediately take to the air when they enter the Shadowlands. This should please a lot of winkers, as it simplifies both the classic level path and the alternative method via the threads of fate. However, it will not be possible to fly from one area to another. This is due on the one hand to technical obstacles and the fact that the areas are actually extremely far apart in terms of storytelling. According to Hazzikostas, you would have to fly 30 to 40 minutes to reach the next area.

By the way, flying is only activated in the four areas of the pacts. In Oribos and in the Throat, you will continue to have to remain grounded in the facts. This also applies to the new Korthia area, which technically belongs to the gorge.

Read these interesting stories too PC

We spoke to Ion Hazzikostas and Ely Cannon about WoW Shadowlands Patch 9.1 and learned some interesting things.

The  Q&A on WoW from BlizzCon 2021 – we have summarized all the important information and answers from the developers for you!

Image gallery for “WoW: Flying in Shadowlands – account-wide and from level 50”

Very cuddly! Rebel Wilson turtles with Jacob in the snow

Digital surprise factors in the race for the CDU chairmanship

Walkers on the Schlachtensee break in the ice – BZ Berlin

“A stone weighing around 2.5 tons has rolled into a house...

Meanwhile found four dead after landslide in Norway – miscellaneous from...