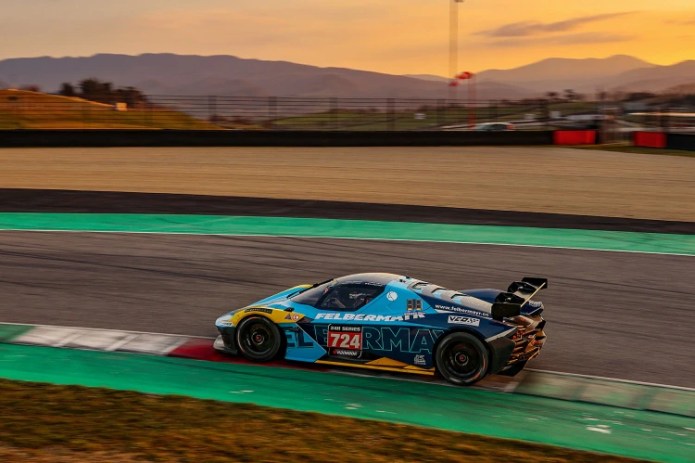 Horst Felbermayr, Eike Angermayr, Nicolai Elghanayan and Mads Siljehaug started the Mugello 12h with the KTM X-Bow GTX. The quartet was able to take class victory and tenth place in the overall standings.

The KTM X-Bow GTX is an absolutely spectacular vehicle. Several test races were already contested with it in 2019 and 2020. The finished version will now be in racing use from 2021. After the last time the racing car had been accelerated in Japan, the European debut was now on the agenda. Horst Felbermayr, Eike Angermayr, Nicolai Elghanayan and Mads Siljehaug started the 12h race in Mugello and won the GTX class. In the overall standings, they moved up to tenth place.

The weekend on the demanding but beautiful Italian mountain railway did not start well: On Wednesday and Thursday the KTM X-Bow GTX had an unplanned meeting with the track barrier, whereupon the team from Reiter Engineering returned the lightweight super sports car twice had to get ready to drive. Thanks to the modular design, however, this was done quickly and easily, from then on the car in the traditional Felbermayr colors ran like clockwork.

Still in 15th place in qualifying, the car and driver were able to convince in the first part of the race on Friday afternoon in a three-way battle with two Lamborghini Huracán Supertrofeo and even take the overall lead in the meantime. On Saturday, as Horst Felbermayr said as a motto before the race, the focus was on gaining experience with the new KTM X-Bow GTX. This requirement was met with flying colors by all those involved.

The team boss responsible for the mission, Hans Reiter, was correspondingly enthusiastic at the finish: “We got the car right before the race, fresh from the factory in Graz, so to speak. We were only able to install the specified loggers, position lights and systems, there was no time for a roll-out. And then the car – apart from the two slips and the necessary breaks for repairs – drove through from Wednesday morning to Saturday evening, we didn’t do anything other than refueling and changing tires. And of course it was especially nice to watch when Horst fought with the two Lamborghinis on Friday. That clearly shows how well the KTM X-Bow GTX works in long-distance races. “

Horst Felbermayr, who drove both the start and the final stint, was also extremely satisfied: «We had hoped that we would not only come over the distance, but that we would also achieve a good result. The tenth place overall and the clear victory in the GTX class is of course more than satisfactory for our debut with this car. I just got out, but I can hardly wait for the next start of the race! “

Victory in Mugello went to the Herberth Motorsport team, known from the ADAC GT Masters. The Porsche 911 GT3 R of Ralf Bohn, Daniel Allemann, Robert Renauer and Alfred Renauer started the second part of the 12-hour race from pole position. Although the Porsche fell back to fourth place after the first pit stops on Saturday morning, the Bavarian team benefited from a perfectly implemented strategy and finally crossed the finish line with a lead of three laps.

Second place went to MiddleCap racing with Scuderia Praha-Ferrari 488 GT3 driven by Josef Kral, Miroslav Výboh and Matúš Výboh. The podium was completed by the Dinamic Motorsport Porsche 911 GT3 R driven by Roberto Pampanini, Mauro Calamia and Ivan Jacoma. That is the preliminary result for reading.

Leipzig continued in the cup after 3-0 in Augsburg, Hoffenheim out

Federal Minister of Labor Heil: Corona aid should not be counted... NFL legend Kevin Greene dies at the age of 58