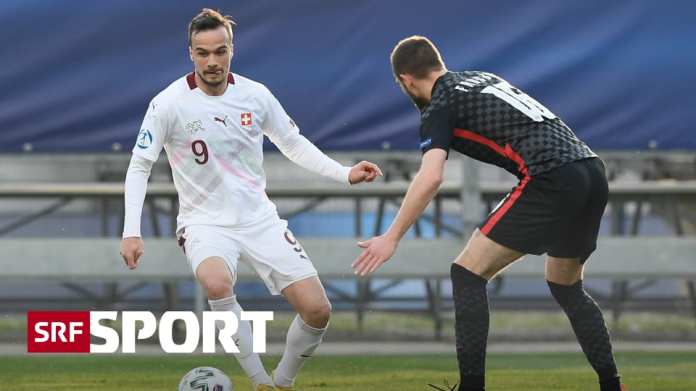 The Swiss U21 national team suffered a major setback at the European Championship after their 1-0 opening win against England. In the second group game against Croatia, Mauro Lustrinelli’s team lost 3-2.

After about an hour, the game in Koper, Slovenia, seemed decided. But when the score was 0: 3, the Swiss, with the kind help of the Croatians, blew up to catch up:

The Swiss would have had it in their own hands to equalize the game when the score was 0: 1. But after Guillemenot had miserably forgiven the 1-1 draw in the 48th minute, the Swiss slipped the game out of their hands. Thanks to goals from Nikola Moro (61st) by penalty and Vizinger (64th), the Croatians pulled away.

Contrary to expectations, Mauro Lustrinelli had switched his team to 4 positions compared to the opening win against England. Simon Sohm, Petar Pusic, Silvan Sidler and Jasper van der Werff were new to the starting line-up. Dan Ndoye and Jankewitz, who were among the most conspicuous players in the first group game, only sat on the bench for the time being.

Initially, performance was not affected by these changes. On the contrary: Already in the first minute of the game, Guillemenot narrowly missed the opening goal following preparatory work by Andi Zeqiri.

In the 8th minute, the SFV offspring fell behind unhappily. Goalkeeper Anthony Racioppi had to take on the 0: 1 twice. First he sent the ball straight into Luka Ivanusec’s feet, then he slipped away unhappily when trying to fend off the Croatian direct closure.

The Swiss put away the deficit and came through Bastien Toma (15th) and the pitiful Guillemenot (20th / 29th) to several good chances to equalize.

Victory against Portugal would be enough

But Switzerland has the certainty that a 1-0 win against Portugal would be enough for the advance into the quarter-finals. In the event of a tie, the parameters from the direct encounters count first. The two late goals from 0: 3 to 2: 3 against Croatia could prove to be valuable if Portugal, Croatia and Switzerland each show six points at the end.

In the other group game, Portugal celebrated their second victory. The Portuguese won 2-0 against England. Dany Mota and Trincao (per penalty) scored the two goals for Switzerland’s next opponent, who now lead the table with 6 points. The game against Portugal will take place on Wednesday (6:00 p.m., live on SRF two).

Coronavirus vaccination start: the pilot did not want to fly around... Dow Jones: the record and its consequences – economy

FP-Wien Klubobmann Krauss on the Vienna budget 2021: “We expect full...

FC Barcelona – “The best player in history”: Joan Laporta is...