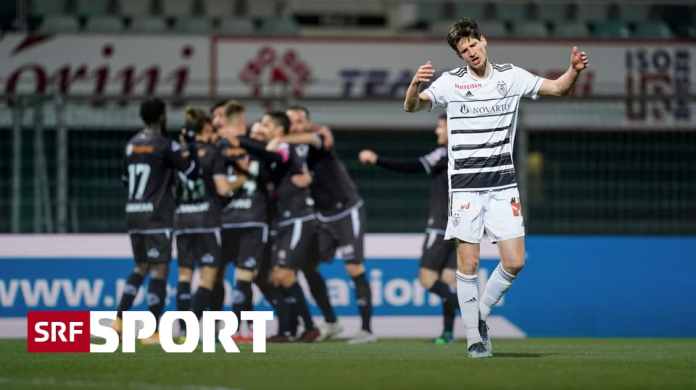 This game almost took another spectacular turn. With a score of 2: 1 for Lugano, Edon Zhegrova brought a final cross into the penalty area a few seconds before stoppage time was up. Arthur Cabral started with his back to the goal for the overhead kick, hit the ball perfectly, but Lugano goalkeeper Noam Baumann dived into the high right corner and parried.

The first Lugano home win since November 29th was perfect. Back then, guests at Cornaredo: FC Basel of all places. Since then, the Ticino have played 8 home games without a win.

Half time 1 at Basel

The game had started very differently. The first half turned out to be combative and balanced in terms of the proportions of the game. Only FCB had chances, of which he used the one to lead in the 22nd minute. Cabral prevailed in the air duel after a corner, Baumann did not look good.

Lugano reacted 6 minutes later with the alleged equalization by Joaquin Ardaiz, which however did not count because an offside position was present in the formation.

Half time 2 at Lugano

After the tea break, the picture was completely different: Suddenly Lugano had the chance and Basel was trembling. The Luganesi changed their system and from then on acted with two strikers. Asumah Abubakar and Numa Lavanchy initially failed. The Slovenian-Austrian dual citizen Sandi Lovric scored the overdue 1-1 in the 60th minute.

Now Lugano had smelled a fuse and was getting even stronger. In the 76th minute Mattia Bottani was finally forgotten in the penalty area: After a pass in the back of the defense, the Lugano ten scored the 2-1 winner. In the scoring statistics of the 2nd half, it was 5: 1 for Lugano at the end.

Lugano overtakes FC Basel in the table and is now in 3rd place. Basel’s next game will take place on April 5th at home against Vaduz. Lugano is a guest at Servette the day before. Brexit: Agreement is in sight for a trade deal between the...