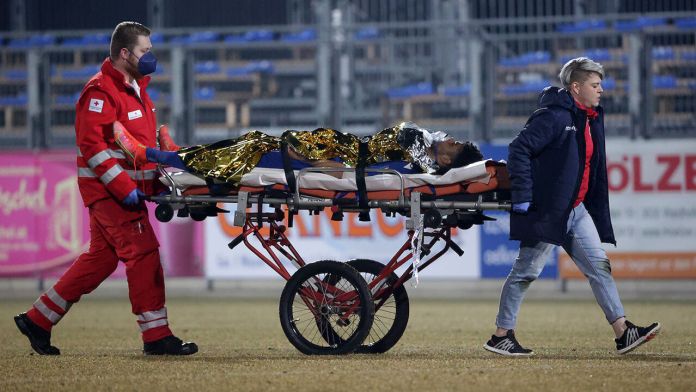 Dramatic scenes in the supplementary game of the 2nd division between SV Horn and the Young Violets! After a moment of shock, the game cannot be played to the end again.

Horn defender Amro Lasheen collapsed in the 54th minute when the score was 4-1 for the young violets in the middle of the field. Immediately a swarm of people formed around the 22-year-old, who received first aid immediately. The paramedics immediately rushed onto the lawn to help Lasheen, who lost consciousness.

After a few minutes, however, the Horn-Profi can be stabilized again and transported to the hospital. According to Horn, Lasheen was approachable again after being carried off the pitch.

The responsible persons of both teams then agree to abandon the game. “The Senate 1 decides on the further course of action and the evaluation of the game,” said the league in a broadcast.

Horn had previously taken the lead through Marco Siverio (18th), but goals from Niels Hahn (20th) and an own goal by Simon Pirkl (27th) turned the game in favor of the Jungveilchen. A penalty from Stefan Radulovic (47th) and another goal by Csaba Mester (52nd) put the result after the break at 4: 1 before the game was abandoned.

Four games live on the 1st of Advent! The mega...

Manfred Haimbuchner no longer has to be ventilated – Upper Austria

Amanda Huber is touched by AEW’s farewell to her husband –... Government – Stuttgart – Eisenmann welcomes the opening of schools and...

Sony had plans to remake God of War and Uncharted