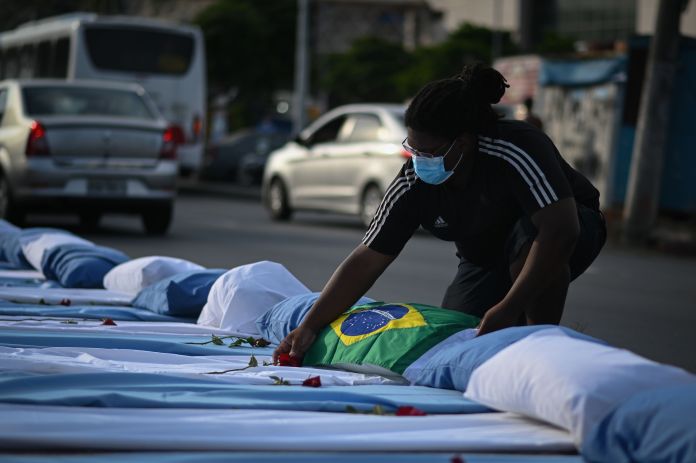 90,830 new cases and more than 3,000 deaths in just one day: The corona pandemic has gotten out of control in Brazil.

What happens if you don’t take Corona seriously can currently be observed in Brazil: The number of new infections every day is constantly reaching new heights, as is the number of deaths. Last Wednesday alone, the virus was detected in 90,830 people and over 3,000 died. Some of them while waiting for ICU beds.

Because not only the oxygen in the country became scarce during the second wave of the pandemic. There is also a lack of treatment options: According to Guardian.com, in practically all 26 Brazilian states and the federal district with the capital Brasília the capacity limits of the intensive care units have been exceeded or are close to. “The situation is absolutely critical,” warn researchers from the Fiocruz research institute. There is also talk of an “unprecedented catastrophe”.

Manaus as a breeding ground for dangerous variants

The disaster had taken its course in Manaus, the capital of the state of Amazonas. From there, apocalyptic conditions were reported as early as January 2021. The virus variant P.1 was held responsible for this, which was first detected in four Japanese tourists who had returned from the same area at the beginning of the year.

Today we know that P.1 did not trigger the second wave in Manaus. Rather, the virus has mutated to P.1 because it found perfect conditions for it in the city: Due to the high number of cases during the first wave, it assumed herd immunity in the population and therefore lulled itself into a false sense of security. As a result, the mutant was able to spread unchecked.

P.1 is part of the problem

The Brazilian mutant, as P.1 is also called, is considered to be significantly more contagious and is obviously more dominant than the virus of origin. While the mutant was still detectable in a sample in November 2020, it was responsible for around half of all corona infections by December. In January the value was already more than 90 percent, in February there was hardly any other variant in the region.

Another problem: P.1 is able to bypass the immune defense gained through previous infections. People infected in the first wave became infected a second time, and some even a third time.

The violence of the current wave in the South American country is also due to human error. Because since the beginning of the pandemic, the Brazilian President Jair Bolsonaro has been downplaying the virus and its consequences: He describes Covid-19 as a “minor flu”, and the best protection against it is by going through the disease.

The right-wing populist ruler doesn’t think much of measures to contain the virus either: masks are only for “wimps”, provincial politicians who imposed lockdowns, he described as “criminals” who stifle the economy. He railed loudly and often against the vaccination.

It is precisely this combination of a virus that has become more dangerous and an ignorant president that worries leading scientists in the country. It could undo all efforts in the world to control Sars-Cov-2. Because with such a high number of cases in Brazil, mutations could occur again.

“Today, Brazil is the place in the world with the greatest probability of developing variants that can be dangerous for the whole world,” says José Eduardo Levi, virologist at the University of Sao Paolo in an interview with “ZDF heute”. “The international community must mobilize, show a lot more initiative, even if it is only in its own interest.”

Because further mutations could result in Sars-CoV-2 becoming resistant to the vaccinations, explains biologist Lucas Ferrante from the National Institute for Amazon Research. Such a super mutant would have consequences for the entire world health. Like Levi, he hopes for outside support. Specifically on “sanctions that would force Bolsonaro to do something because he ran out of his economic argument,” said Spiegel.de.

In a star TV report he also appeals to other countries to do everything possible to keep P.1 away from themselves: “It is now important that all countries block all flights from Brazil so that this new variant does not spread around the world . ” For many nations, this advice comes too late, because the Brazilian variant has long since reached other countries, including Austria. Here the variant first appeared in March.

Mutated virus threatens Europe – but Switzerland is waiting for now

Detective Adventure as an interactive book for Switch