A comparable drop in places cannot be found in the statistics, an exclusive analysis shows. Could the federal government and the cantons prevent worse things from happening if they didn’t hesitate?

In Gastrosuisse’s rhetoric, the highest escalation levels were reached early on. In April 2020, President Casimir Platzer described it as “cheek” when the Federal Council said nothing at a press conference about the reopening of its industry. “I would give it a very bad grade.” Less than a year later, Platzer verbally struck countless times and did so again when the gastrolockdown was refused to end: “The Federal Council is obviously targeting us!”

The rhetoric has been shrill for so long, the attention so high that the audience may be tired. Nevertheless, the extent of the gastronomic job crisis is surprising when you look at the figures and put them in graphics. Negative records are pulverized in rows. The corona crisis mutates into a major crisis in gastronomy, which is almost the opposite of social distancing.

The loss of jobs in the catering industry is historic. Image: keystone

At the end of 2020, there were 17 percent fewer jobs in the catering industry than a year earlier. In an important industry that had 190,000 jobs before the crisis, this corresponds to the loss of 33,000 jobs. It is a job slump on a scale and at a rate that cannot be found in the statistics a second time.

For the catering industry, it is immediately apparent that there has not yet been such a job destruction as in the corona crisis. The second worst slump occurred in 1997, during the last legs of the Swiss real estate crisis of the 1990s.

However, its dimensions are small compared to the corona crisis. A third major decline can be observed in 2011. Back then, the catering industry was hit by the long-term effects of the financial crisis: Switzerland was caught in a recession in 2009, after which the constant loss of value of the euro hurts. But these earlier gastro crises don’t cost half as many jobs as the current one.

The banking center, which became the main arena during the financial crisis, has not gone through anything comparable to the catering job crisis. At that time, the downsizing hardly took place at all for years. Four years after the crisis broke out, the banks still have almost the same number of jobs.

Only when stricter rules take effect does the number of digits slowly decrease. And it is falling a little faster after the National Bank introduces negative interest. In this twisted world of interest rates, the banks earn less from the interest rate differential business.

Nevertheless, the contrast that is evident in the corona crisis with gastronomy remains clear. After the financial crisis, the banks lost fewer jobs, everything happened much more slowly. The loss of 20,000 jobs is spread over an entire decade. Things are fast and cracking in the catering industry: 33,000 jobs will be gone in one year. In terms of jobs, gastronomy is in the corona crisis what the banks were in the financial crisis: the main scene of the action.

Accusation of the catering trade: the banks were helped more resolutely

This contrast does not go unnoticed. In gastronomy, it is explained as follows: the state did not immediately help. On request, a spokesman for the Gastrosuisse industry association says, UBS had been saved with tens of billions of francs, with the big bank falling into the crisis through its own fault.

Now the hotel and catering industry are in trouble through no fault of their own. But the Federal Council, Parliament and many cantons would only act very cautiously. He says:

The big gastro job crisis can also be compared with how other industries fare in the corona crisis. In this view, too, there is nothing comparable to gastronomy. It loses the highest percentage of jobs and most in absolute terms.

The second biggest slump in the hotel industry is by a large margin. This is followed by the placement of temporary positions. On the other hand, there are gains in postal and courier services. Such services bring back what the pandemic tore apart.

Gastronomy in Austria is losing even more jobs

A look at foreign statistics shows that the gastronomy there is similarly dreary. According to these figures, even more jobs are being lost in Austria than in Switzerland. In Italy or Germany the losses seem to be of similar magnitude. What happens around Switzerland is likely to have its equivalent in most countries. In the midst of the pandemic, a global gastronomy crisis is taking place.

Finally, one can return to the Swiss figures. Is there somewhere in the employment statistics a job slump comparable to that experienced by the catering industry in the corona year? You can go through every single quarter in every industry and go back three decades.

Then it turns out: Aviation and the placement of temporary jobs have already been through years in which a larger proportion of their jobs were lost than now in the great catering crisis. But a lot more people work in the restaurant business. And so the reduction of 33,000 jobs in just one year remains unique.

The coronavirus in Switzerland – a chronology

These kids see their grandparents again after months and it’s …

NoLiestal: A hashtag floods the social media – that’s behind it

So far, the opponents of the measure in particular have drawn attention to themselves. That should change with the NoLiestal campaign.

Last Saturday around 7,000 people gathered in Liestal to demonstrate against the Corona policy. Masks hardly worn or only worn as a costume accessory, no trace of safety distances.

Supporters of the measures find that annoying. Satirist Nils Althaus vented his anger on Twitter and wrote:

For this reason, he finally calls for a counterstrike on Sunday:

This morning the action has now started – and how: Countless people make themselves and …

After the error is before the error 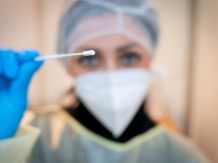