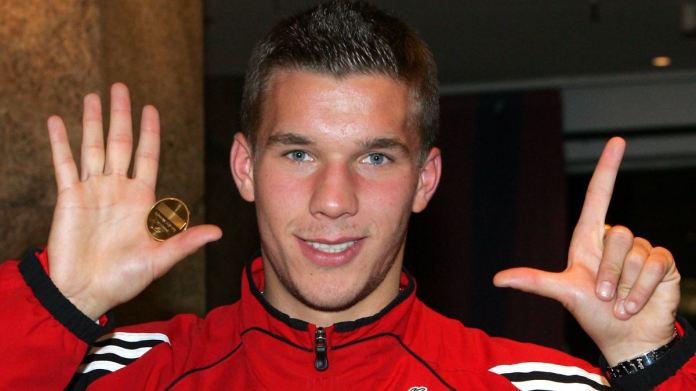 50 years old and always curious: The goal of the month is an institution in the ARD “Sportschau” and offers a wealth of stories from superstars to amateurs. Nobody wins as often as Lukas Podolski, but three times in a year only one other exceptional competitor has won.
The old (mail) sacks were long gone at the goal of the month. They were an integral part of the ARD “Sportschau” until the end of 1996, when the victorious shooters drew the winner from the audience letters. Today you can vote by phone and online. Since the start in 1971, a lot has changed in terms of the cult choice. But the appreciation for the competition has remained.

“We noticed that goal of the month is still very relevant for those involved, no matter how famous they are,” said Sportschau boss Steffen Simon. “You can tell that it means something to the professionals when they get the coin.” 557 goals have been awarded to date. This month, the election invented by the former “Sportschau” boss Klaus Schwarze will be 50 years old. A story with curiosities, exceptional winners and records.

The first winner: Anyone who knows the first winner of the competition can call themselves a real expert. Gerhard Faltermeier is the name of the premiere winner who played for Jahn Regensburg in the second-rate Regionalliga Süd. Faltermeier, who died in 2009, scored his goal against VfR Mannheim with a powerful free kick – and curiously, the ball got stuck between the frame and the net. It wasn’t enough for the first goal of the year. The Dane Ulrik Le Fevre scored 6-0 in the game Borussia Mönchengladbach against Schalke 04.

The record winner: Lukas Podolski made the dozen in his farewell game for the national team in 2017. The former national player is the record winner with twelve goals and is clearly ahead of Jürgen Klinsmann with seven. “I’m proud of it,” said Podolski on ARD. “These are moments for the ages for me.” I don’t know whether his record will “be broken again – football will continue.” The 35-year-old can also add more himself, at least until the end of the season he will play at Antalyaspor.

The exceptional winner: Even the record winner Podolski did not succeed. Bernd Schuster scored the goal of the month three times in 1994 and could only be beaten by himself in the selection for goal of the year: The world star, who was under contract with the Bundesliga club Bayer Leverkusen at the time, took 1st, 2nd and 3rd place.

The record team: Podolski took the first three places in a very special statistic. The striker played for the three teams that are ranked 1st, 2nd and 3rd in the team ranking – the German national team with a total of 59 goals of the month, FC Bayern Munich (56) and 1. FC Köln (36) .

The first woman: When there was still chauvinism in the male-dominated sports editorial team in dealing with women’s football, Bärbel Wohlleben won the election for her goal for TuS Wörrstadt in the first final of the German championship against DJK Eintracht Erle in September 1974. After Wohlleben, twelve more women won.

The oldest: Kurt Meyer was 79 years old when he scored the goal of the month on January 20, 2001 as captain of the Blau-Weiß Post Recklinghausen in the old league game against FC Jungsiegfried Hillerheide. A year later he was honored again: With his hit in the corner, he also won the election for goal of the year.

The only GDR player: The goal of the month September 1986 was a free kick shot with spin. The special thing was the shooter and the game. Winner Jörg Burow played for Carl Zeiss Jena in the GDR Oberliga and scored the goal in the match against Stahl Brandenburg. He was the only player from the GDR Oberliga who was honored. He had to wait for the coin until after the fall of the Berlin Wall in 1989.

Extraordinary Winner I: Serdal Celebi from FC St. Pauli scored the goal of the month in August 2018. Celebi is blind. He scored in the final of the German blind soccer championship. Hamburg lost the game, but the 36-year-old made goal of the month history.

Extraordinary Winner II: Michael Freudlsperger’s goal in March 2015 is something special from several points of view: It is the only goal from a penalty, Freudlsperger is the youngest winner at the age of 16, and he has trisomy 21. During the break in the Bundesliga game of FC Bayern Munich against Borussia Mönchengladbach on March 22, 2015, the Bayern fan converted from the penalty spot against keeper Tom Starke.

The quarter century gate Klaus Fischer received the badge six times. But one goal stands out: his overhead kick on November 16, 1977 in the international match against Switzerland is not only goal of the month. Fischer also wins the Gate of the Year, Decade and Quarter Century elections. Almost 26 years later, he was honored again: In July 2003, the then 53-year-old hit a scissors-blow in a nostalgia game in Munich.

Emotionstore: The nicest goals didn’t always win. Often it was important hits that were very popular with the audience: Oliver Bierhoff’s Golden Goal was chosen in the final of the European Championships in 1996 and was also ahead in the selection for Goal of the Year. Seven years later, Nia Künzer also achieved this with her golden goal in the World Cup final against Sweden. Mario Götze’s decisive 1-0 win against Argentina in the 2014 World Cup final in Rio even received the award of Goal of the Decade.

So you can still shop at MediaMarkt Dresden despite the lockdown

WHO experts are allowed to visit China on January 14th –...

Frankfurt: The stages should remain at Theaterplatz