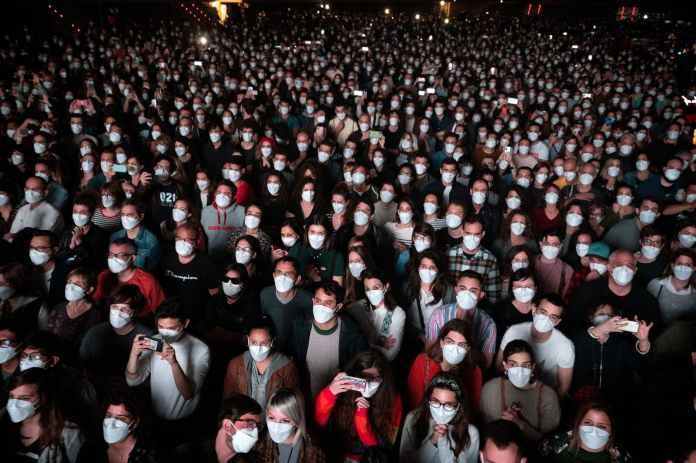 Finally going to a concert again with thousands of other fans. This dream came true in Barcelona at an event under strict hygiene conditions.

For the first time since the beginning of the corona pandemic, there was a big pop concert with 5000 spectators in Barcelona on Saturday evening. The performance of the indie pop band Love of Lesbians in the “Palau de Sant Jordi” multi-purpose hall, which was designed for up to 24,000 guests, was a pilot and was officially approved.

The aim was to test whether such large events can be safe despite Corona with sufficient precautionary measures. «Welcome to one of the most moving concerts of our lives», the Love of Lesbians singer Santi Balmes greeted the crowd.

The evening was definitely a great success for the fans. “It was great, actually even better than before Corona, because everyone was so incredibly happy and exuberant, because they could finally be in a concert again. Many danced and sang along under the mask, »Rubén Casado told the German press agency. “Hopefully there will be more such events soon,” added the 48-year-old.

Before and during the concert, strict protective measures were in place, which were monitored by a team of doctors. All spectators had to take a quick test on Saturday in one of three special test centers between 8 a.m. and 4 p.m. Only 6 of the 5000 tests were positive, wrote the newspaper “La Vanguardia”.

According to the organizers, only registered visitors between the ages of 18 and 65 who owned a newer smartphone were allowed in to download a program for the test result. In addition, the viewers had to consent to their data being compared with that of the health authorities.

Shortly before Christmas, there was a concert by pop singer Raphael in Madrid, also with around 5000 participants, but without scientific support. The audience had to sit and keep their distance.

Relief in the pandemic: 10th graders do not have to take...

Kaufland and Lidl: Suddenly the receipts look completely different – THAT...

How to fight the housing shortage in Frankfurt – FAZ –...

Resistance to the cable car: “We want to primarily preserve the... Berlin police should show more presence in neighborhoods on the outskirts